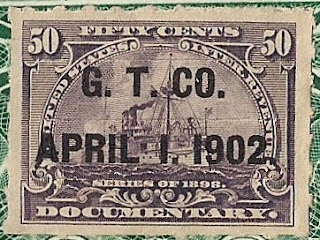 G.T. CO.
APRIL 1. 1902
This stamp comes from a share certificate for the Choctaw, Oklahoma, and Gulf Railroad Car Trust company.  The full document scan is shown below.
I am seeking other values of the battleship series with a GT Co printed cancel.  Has anybody seen these?  This cancel was not documented by Richard Fullerton in his guide to documentary printed cancels from 1952. 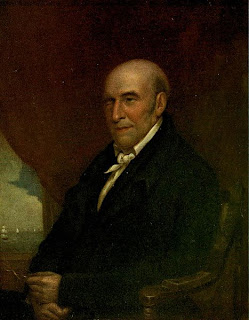 Stephen Girard
1750 - 1831
The Girard Trust Company was started by and named for Stephen Girard.
The charter of Alexander Hamilton's First Bank of the United States expired in 1811.  The bank was located in Philadelphia, the home of Stephen Girard, who was the richest man in the United States at the time.  Girard bought up the stock and assets of the bank with the charter expiration and created his own bank, which eventually came to be known the Girard Trust Company.  Girard's bank was the main source of financing for the US government for the War of 1812 - Girard personally underwrote 95% of the government's war loans.  The Girard Trust Company merged with Mellon Bank in 1983.
My mother's family has roots in Girard, Richland Parish, Louisiana, near the town of Rayville.  The family home in Girard was located on a piece of a Stephen Girard plantation, and the family still has some of the land from the plantation today.  Girard never travelled to Louisiana but worked through a local agent, Judge Bry, to purchase land and establish his plantation. 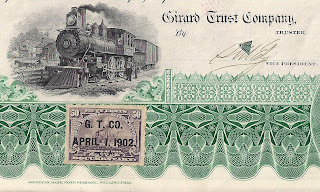 inset from the full document of the stamp and signature 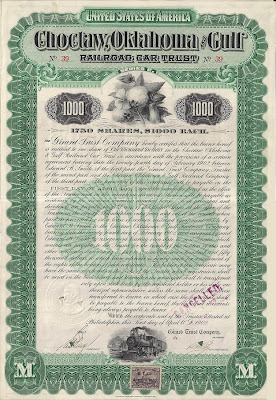 Share document for the Choctaw, Oklahoma and Gulf Railroad Cart Trust
From The New York Times, April 15, 1902:
CHOCTAW AND GULF SALE
Speyer & co. Deposit with Girard Trust Company Majority Stock,
PHILADELPHIA, April 14.--Over 155,000 shares of the stock of the Choctaw, Oklahoma and Gulf Railroad had been deposited with the Girard Trust Company in favor of the sale of the road to Speyer & Co. of New York up to the close of business today.
The total shares of the Choctaw issued amount to 296,000.  This settles finally the question of ownership of the road, which goes to the New York banking house, and it is expected will be turned over to the Rock Island system.
The minority holders have until May 7 to accept the offer made, which is ofr the purchase of all common stock at $80 and preferred at $60.
Posted by John Langlois at 12:01 AM