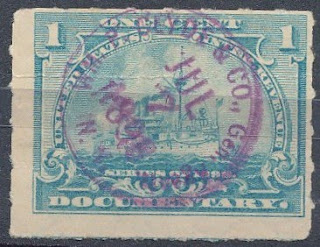 WM.  P.  CLYDE & CO., Gen. Agents
JUL
7
1898
N.Y.
There is much behind this cancel.  My research for this post, no more than a glance at the veneer of William P. Clyde & Company and its business, reveals a complex history.  William P. Clyde & Company controlled a large shipping company that bore the name Clyde Shipping Lines.  And a ship, probably built and named for a family member of the original founders of the firm with the name William P. Clyde, carried former Confederate States of America President Jefferson Davis from Georgia to Fort Monroe in Virginia after the end of the Civil War. 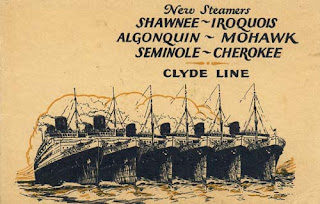 Clyde Shipping Lines ran services primarily along the east coast of the United States and into the Carribean. 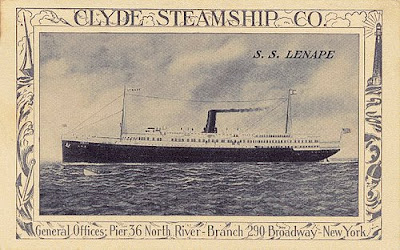 A Clyde Lines postcard.
The Clyde Line was established in 1844 by Thomas Clyde, connecting Philadelphia with other east coast ports. The headquarters moved to New York in 1872. Besides connecting the northeast and southeast, the line also served the West Indies, especially Dominican Republic, after 1870s.
The company was purchased in 1907 by Charles W. Morse's Consolidated Steamship Lines, which collapsed in 1908. Clyde Line was then taken over in 1911 by the Atlantic, Gulf & West Indies Steamship Lines, a combine of a number of lines, but the Clyde Line name and flag continued in use until 1932, when Clyde was combined with the Mallory Line name to form the Clyde-Mallory Line.
Posted by John Langlois at 12:01 AM