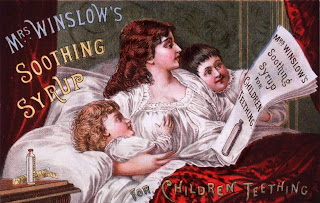 An advertising poster that was a part of Anglo-American Drug Company's sales pitch to mothers of young children.
Anglo-American Drug Company, the producer of Mrs. Winslow's Soothing Syrup, had no shame.  They put morphine in a bottle, added ingredients to help it taste good, and sold it to mothers to give to their teething and colic-y children.   Some children OD'd on the stuff, but many more were raised as addicts.  Google Mrs. Winslow's and find the stories.  Some are quite disturbing.  Fortunately, the drug was taken off the market in the US around 1911, though it remained for sale in the UK until 1930.  No doubt there were many adult addicts of this concoction.

As a father of twin seven year olds, I can't even imagine pouring a spoon of this stuff and administering it to my kids.  So handling these stamps, where each one came from and represents a bottle of this poison that might have been administered to children, gives me great pause. 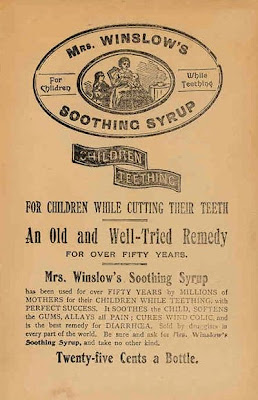 Mrs. Winslow's was first sold in 1849.  The advert above was published circa 1900, and stated the price was 25 cents per bottle.  The tax for all proprietary articles sold for more than 15 cents and up to 25 cents was 5/8 cent.  Mrs. Winslow's was only offered in one size bottle and so Anglo-American only ordered printed cancels on 5/8 cent stamps. 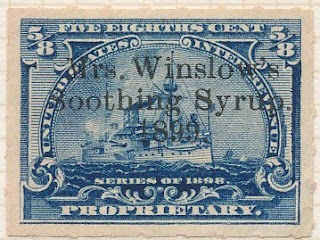 Mrs. Winslow's
Soothing Syrup.
1899.
Type 2
According to the Joyce list below, there were only two types of Mrs. Winslow's printed cancels, and a limited number of collectable types from the series: 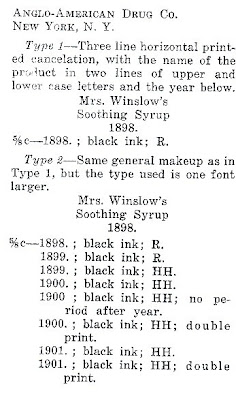 Below is a link to an excel file of this list.  As of this time this list contains no additions to the original Joyce dates and types.
Updated Anglo-American Drug Co - Mrs. Winslows printed cancels list 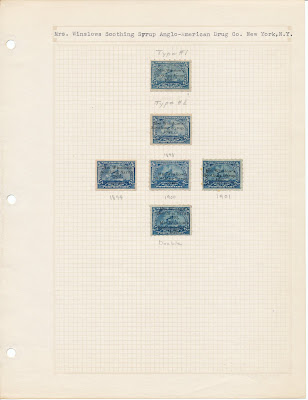