At the end of the of the documentary battleship listings in the Scott Specialized Catalog (after R172) is a little note that says: "Numerous double transfers exist on this issue."  Battleship stamps have long been the stepchildren of US revenue stamps.  And here is more proof.  First issue double transfers in some cases get their own listing in the catalog.  For the battleships, Scott just says there are a bunch of 'em.  And there are.  Philatelic literature abounds with illustrations of these "errors", especially on the 2 cent documentary.  Today this blog will consider one example.
Retired Master Sargent David Thompon of Nevada sent a great image of a plate screw head in the margin of a 1 cent proprietary a week ago which I posted on this site.  A couple of days ago he sent a few stamps for my inspection by snail mail including the 2 cent documentary below he suspects as having evidence of a triple transfer.  I am not much of an expert or even amateur in these kinds of re-entries, whether they are double or triple transfers or a shift of any kind.  As a collector I am mostly interested in what I call macro-issues, like cancels and the companies that made them.  Closely examining 100s if not thousands of R164s to ID shifts and extra transfers is not where I naturally gravitate.  However, though I am not driven by the process of discovery with these kinds of plate varieties, I am more than happy to examine a confirmed specimen like the one below.  And David is certainly right about this stamp showing reentry marks.  They cover the stamp on the left, right, bottom and beyond.  Whether this is an example of a triple transfer, I don't know.  But I do have some literature on this subject for R164s available to me, and now I have a reason to read it carefully.
Below I will show the full stamp and some close ups of the stronger reentry markings.  I have scanned this stamp at 800 dpi allowing sharp and clear enlargements of sections of the stamp. 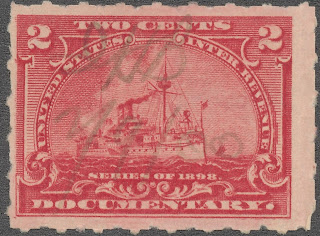 Upper left 2.  See the red lines and dashes within
the white field of the 2.

Reentry signs everywhere here, but most striking in each E, particularly the last
E which looks mangled.

Overall blurry appearance.  There is a small dash on the left
corner outside the frame line
I could have created graphics with arrows showing the greatest areas of evidence of multiple transfers, but the images themselves are the best evidence.  You can click on each image to see a much larger version.
There is literature available on transfers and shifts on the battleships, especially the 2 cent documentaries.  The American Revenuer ran an extensive series on 2 cent documentary reentries by Warren L. Bosch starting with the May 1983 issue and continuing through January 1984 for over 20 pages of narrative with illustrations.
In 1981, Bosch came upon a trove of roughly 5000 cashiers checks in sequential order from a bank in South Dakota that was moving from its original building.  These checks bore the 2 cent battleship.  He worked to reconstruct the panes/sheets using check sequences, centering, watermark fragments and perf matching.  And then he proceeded to examine the stamps for reentries.  If you are interested in battleship reentries this series is a must.  Write the APRL if you don't have access to old copies of the American Revenuer.
Bosch's masterful work didn't include a full literature review for reentries though, and he comments on the lack of such material, only referring to the work of George Black in Weekly Philatelic Gossip from 1938 to 1940.  Bosch missed what can be easily found these days using Riley's Fiscal Philately Handbook, which is an index of articles in the literature for revenue items.  Using Riley's index I have a stack of articles from the Bureau Specialist from the 40s and 50s in which the Bureau Specialist's revenue chairman, C. Brinkley Turner devotes columns to battleships and to reentries and plate markings of all kinds.  July 1949, March 1950, and December 1950 editions focus on the 2 cent battleship. 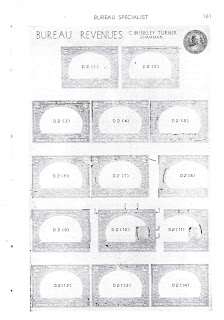 Page 160 from the July 1949 Bureau Specialist highlighting
reentry marks and other plate markings like layout lines.
The original is also a bit blurry.  The Bureau Specialist is now the US Specialist.
Turner and Bosch both show multiple examples of reentries though neither show a stamp with as extensive reentry markings as Mr. Thompson's stamp above.
There might be more literature out there on reentries but the Brinkley Turner and Warren Bosch material is a good place to start.
Posted by John Langlois at 1:00 AM