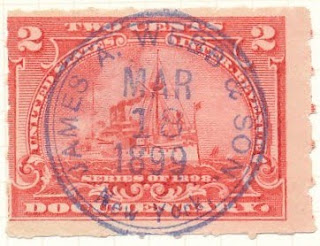 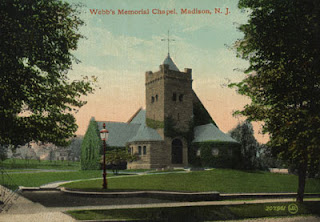 Postcard of Webb's Memorial Chapel, Madison, NJ
James A. Webb, Sr., also is active in the work that develops the character and lifts man from the sordid things of life to "a purer and broader view." He was one of the organizers of the Young Men's Christian Association of Madison, and was its second president. He continues in his efforts to promote its interests. A life-long member of the Presbyterian church, he has been treasurer of his home church and was superintendent of the Sunday-school for more than thirty years, and has ever labored earnestly for the advancement of Christianity among men. His belief, too, is evidenced in those practical efforts wherein assistance is rendered in tangible form ' gifts to those who fail to secure success and the advancement of various interests that contribute to the material welfare, the aesthetic culture and the happiness of the individual. In this way he has been instrumental in promoting the interests of Madison.
The commercial activity of any city contributes to the welfare of all its citizens, and realizing this truth Mr. Webb has been an active factor in promoting a number of her enterprises. He is a director and vice-president of the First National Bank of Madison; was one of the organizers and directors of the Morristown Trust Company; a director of the Safe Deposit Company of Morristown, a member of the Washington Association of Morris county, and is interested in several banking and trust institutions in the city of New York, and is a director and officer in several large manufacturing concerns in that city.
In his political affiliations Mr. Webb has been a stalwart Republican since the organization of that party, and has been a conspicuous figure in local and state politics. Though frequently urged to become a candidate for office, both state and national, he has steadily refused, and will accept no political office, having served only in positions in Madison when he felt that his duties of citizenship demanded his services. He was a Harrison elector in 1892, and has served as commissioner of appeals of Madison and Chatham townships for more than a quarter of a century. Mr. Webb was closely identified with the formation of Madison borough, resulting in the establishing of first-class water works and the installing of an electric-light plant of the very best order. Through his personal efforts and guaranty, the benefits of a metallic-circuit telephone exchange are now enjoyed by the citizens of Madison. In short, whenever co-operative effort will inure to the benefit of his fellows, Mr. Webb is always at the front. He is the owner of a large amount of town property. His own home is located on High and Prospect streets, Madison, in the midst of ample grounds, standing on an eminence which commands a splendid view of the surrounding country.
Mr. Webb's prominence in the business world has made him well known by reputation throughout the country. He is a familiar figure in Washington and in New York, and, among his friends are some of the most distinguished statesmen of the capital city, the most celebrated representatives of the Congress and the most prominent business men of the country, and he is accorded that honor and respect everywhere given to true worth. The world instinctively pays deference to the man whose success has been worthily achieved, who has attained wealth by honorable business methods, acquired by merit the highest reputation in his chosen calling, and whose social prominence is not the less the result of an irreproachable life than of recognized natural gifts.
Posted by John Langlois at 11:00 PM