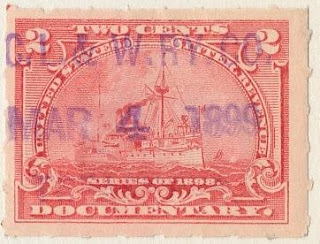 C. L. & W. RY. CO.
MAR     4      1899
In 1909 the CL&W would be absorbed by the B&O, yesterday's cancel of the day.  In 1870 the Lake Shore and Tuscarawa Valley Railroad was formed to build a line between Lorain and Wheeling, West Virginia.  The Railroad was forced into receivership in 1875, and was reorganized as the Cleveland, Tuscarawa Valley and Wheeling Railroad.  It went bankrupt again and emerged in March 1883 as the Cleveland, Lorain and Wheeling Railroad, which would in turn be operated by the B&O by 1909.
Posted by John Langlois at 1:00 AM