Cancel for March 17: McKesson and Robbins 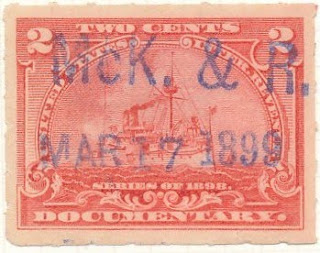 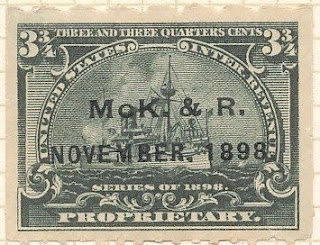 McKesson and Robbins used printed cancels on many stamps of the proprietary series, on multiple values and with multiple dates.  An exploration of those cancels is pending on this site.
McKesson and Robbins is today known as the McKesson Corporation (NYSE: MCK) and is the largest health care company in the world.  2009 sales were $106.6 billion.  Today the firm's headquarters are in San Francisco.  The firm was founded in New York City in 1833 by Charles Olcott and John McKesson.  A third partner joined later and the firm's name was changed to McKesson and Robbins after Olcott died in 1853.
McKesson experienced a scandal of Enron proportions in the 1930s.  The firm was taken over by a man named Phillip Musica operating under the alias F. Donald Coster.  He was a twice convicted felon who used his brothers to create a shell company to which he directed bogus payments.  By the time the fraud was discovered, $20 million of $87 million in assets on McKesson and Robbins' books were bogus.
Today McKesson is one of the oldest continually operating corporations in the United States.
Posted by John Langlois at 12:01 AM