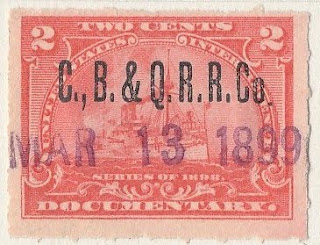 Printed corporate initials, handstamped date:
C., B. & Q. R. R. Co.
MAR   13   1899
1898 CB&Q RR Route Map
The CB&Q ran from Chicago out to the American heartland, and remained one of America's greatest railroads well into the 20th century before a series of mergers led to today's status as a named partner in one of America's largest railroads, the BNSF (the B came from Burlington).  The BNSF is now the property of Warren Buffet's Berkshire Hathaway.
Early in the life of this blog I broke down the components of the current BNSF using 1898s cancelled by BNSF antecedent companies.  I will do a quick review here of some of the historical component parts of Mr. Buffet's company: 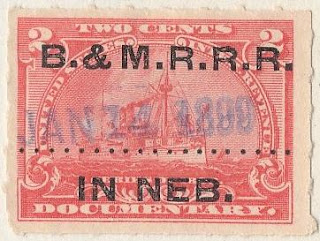 B. & M. R. R. R.
JAN 14 1899
IN  NEB.
The Burlington and Missouri River Railroad in Nebraska was merged to and became an important component of the CB&Q in the early 20th century. 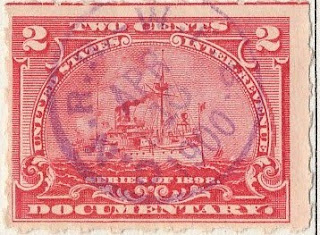 G. N. R. R.   W. F. S.
APR
10
1900
The Great Northern Railroad was "Empire Builder" James J. Hill's great creation.  The GNRR ran from Minneapolis St. Paul out to the Pacific and it mainline also ran into Chicago.  The GNRR would eventually take over its competitor and ever financially troubled Northern Pacific.  The merger of the pair with the CB&Q would create the railroad the Burlington Northern.  Much later the BN would combine with the railroad commonly known as the Santa Fe to create the BNSF. 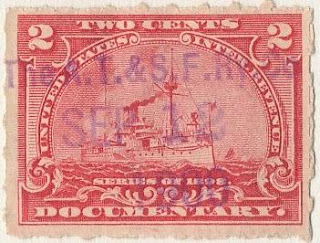 The A. T. & S. F. Ry. Co.
SEP   12
1900
The Atcheson, Topeka and Santa Fe is an American railroad of legend.  Its merger with the Burlington Northern would complete the creation of the current BNSF with all of its major components in place.
***
On November 3, 2009, Berkshire Hathaway announced that it would acquire the remaining 77.4% of BNSF that it didn't already own for $100 per share in cash and stock  The total deal was valued at $44 billion.  On February 12, 2010, shareholders of Burlington Northern Santa Fe Corporation voted in favor of the acquisition.
Posted by John Langlois at 12:01 AM