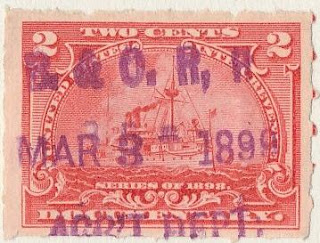 The Baltimore and Ohio Railroad was one of the longest lived railroads in the United States   Like many of its contemporaries, the great railroad no longer exists.  It was conceived when leaders in the city of Baltimore wanted to compete with the newly constructed Erie Canal and another canal being proposed by Pennsylvania, which would have connected Philadelphia and Pittsburgh.   From that beginning it was built into one of the greatest railroad in the United States, and one that would occupy a place on the Monopoly game board.

The original B&O is now part of the CSX Transportation network.  Part of the B&O Railroad's immortality has come from being one of the four featured railroads on the U.S. version of the board game Monopoly, but it is the only railroad on the board which did not serve Atlantic City, New Jersey, directly.

The B&O Warehouse at the Camden Yards rail junction in Baltimore now dominates the view over the right-field wall at the Baltimore Orioles' current home, Oriole Park at Camden Yards. 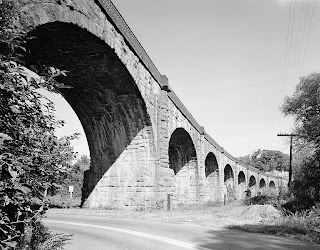 The B&O's Thomas Viaduct. The bridge was built between 1833 and 1835, and is the first multi-span masonry railroad bridge in the United States and the first to be built on a curve.  The Thomas Viaduct was the largest bridge in the nation in its day and today it remains the world's largest bridge of its kind as well as the world's oldest multiple arched stone railroad bridge.  Until after the American Civil War, the B&O was the only railroad into Washington, thus the Thomas Viaduct was essential for supply trains to reach the Union's capital during that conflict. To prevent sabotage, the bridge was heavily guarded by Union troops stationed along its length. The Thomas Viaduct is now owned and operated by CSX Transportation and still in use today making it one of the oldest railroad bridges still in service.
Posted by John Langlois at 1:00 AM