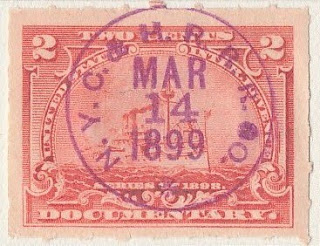 N. Y. C. & H. R. R. R. CO.
MAR
14
1899
The New York Central made itself famous for its water level route to the midwest, with trackage running north from New York City paralleling the Hudson River and then turning west to Buffalo once it reached Albany.  The route was reasonably flat and straight and allowed for low torque locomotives designed for swift travel.  The NYC's main competitor for east-west traffic was the Pennsylvania Railroad, but the PRR ran through the mountains of Pennsylvania, requiring locomotives designed to lug up moutains and hills.
The NYC linked up with the Lake Shore and Michigan Southern railroad, controlled like the NYC by the Vanderbilts, in Buffalo, allowing this system to move traffic to and from Chicago. 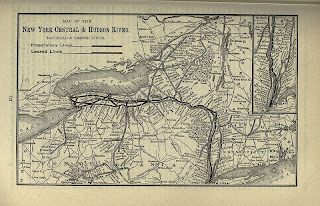 The New York Central and Hudson River Railroad's
Empire State Express featured on Scott #295.  This stamp first
appeared in 1901.
Posted by John Langlois at 1:00 AM