Several months ago the receipt below was offered in an auction by Eric Jackson on Ebay.  While I found it attractive for its railroad associations including the Virginia and Truckee Railroad and the Southern Pacific, I became fascinated with it after a little research revealed that the final addressee was a Medal of Honor winner. 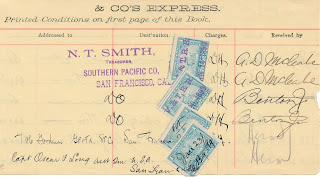 This document is a Wells Fargo receipt book page for items to be forwarded via railroad.  Two of the 1 cent documentary stamps have handstamp cancels for the Virginia and Truckee Railroad.  There is a handstamp for the treasurer of the Southern Pacific Company, N. T. Smith.  There is also an entry for a General Passenger Agent of the Southern Pacific, T. H. Goodman.  The final entry at the bottom in manuscript is for a consignment for Captain Oscar F. Long, Assistant Quartermaster for the US Army in San Francisco.

Below I unpack the independent parts of this receipt: 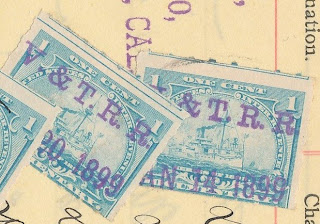 Above image inset from receipt

The Virginia & Truckee Railroad travels over some of the most difficult terrain for a railroad in the United States.  It was built to haul freight between Virginia, Nevada to Truckee, California after the discovery of the Comstock Lode in Nevada, the first large deposit of silver found in the United States.  So much silver was mined there that the US government established a mint at Carson City to process some of the silver supply on site.

Captain Long was involved in the Indian campaigns in the late 1800s, and became famous as a Congressional Medal of Honor recipient for his heroism in the battle of Bear Paw Mountain against Chief Joseph and the Nez Perce Indians.  By 1899 he was an Assistant Quartermaster in San Francisco and was responsible for equipping the ships and troops headed to the Philippines for action in the Pacific version of the Spanish-American war.  He rose through the ranks fairly quickly after his Medal of Honor.  In 1901 he was promoted to Major and Quartermaster.  In June 1904 he was promoted to Lt. Colonel and only one month later was promoted to Brigadier General after which he immediately retired.

T.H. Goodman was a General Passenger Agent for the

Southern Pacific and was based in San Francisco. 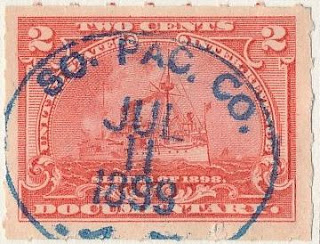 Example of Southern Pacific handstamp; stamp not on receipt 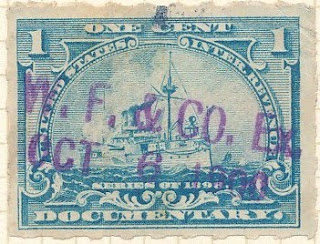 One of the best known brands in American history, Wells Fargo ran banking and express operations from headquarters in San Francisco. Wells Fargo also controlled early pony express and stage coach routes across the west..  The company has since given up its express business and is one of the largest banks in the United States.