Three days ago on January 5 in a post regarding 1/8 cent proprietary prices I mentioned that there were cancellations on these stamps that in certain cases sold at substantial premiums over Scott Catalog prices for "regular" used or unused copies of this stamp.  This post will highlight a couple (and small fraction) of those premium cancels. 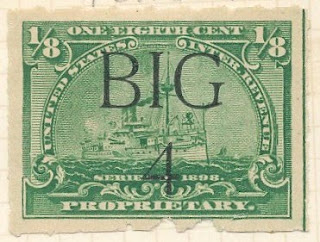 The stamp above is in my collection.  In Eric Jackson's Ebay store he currently lists an extra fine copy of this stamp, unlike the gouged copy above, for sale.  His price is $100.  This cancel is unlike most proprietary cancels.  The printed cancellation was applied by an printing company that printed four stamp collecting journals and magazines, and was applied in 1899 as an advertising stunt.  Despite its philatelic origins the cancel is scarce today.  The PAB used either two or three types of cancels on this stamp and only cancelled 1/8 cent proprietary stamps. 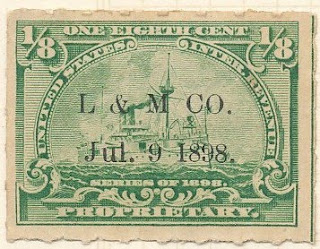 The above stamp was cancelled by Langley and Michaels, a firm based in San Francisco.  At the link to Eric Jackson's store above you can also find a copy of a stamp with this cancel for sale for $12.50.  Langley & Michaels also cancelled other values in the proprietary battleship series.

The above two stamps are a small sample of the many varieties of printed cancels on these stamps.  Handstamp cancels for the certain companies also sell for a premium, and have recently been available for sale by Robert Mustacich on Ebay.  Mustacich is a co-author of the Battleship Desk Reference, and has been selling parts of his collection.

While most used battleship stamps are relatively common and cheap, some are scarce and command higher prices than others.  Above are just two examples.  In the coming year I will be highlighting many relatively scarce proprietary stamps with printed and handstamp cancels.  Stay tuned.

Posted by John Langlois at 8:00 PM