The lowly quarter cent proprietary, common and cheap.  Unused copies sell for no more than a dealer would charge to recover his costs and maybe, just maybe, make a cent or two of profit.  If you are accustomed to collecting postage stamps of the 1898 era and you stumble across the valuations of the common battleships, you are likely to be shocked, as even the most common postage stamps of the era sell for far more than just a few pennies.  But supply and demand works in favor for the collector of battleship revenues.  Lots of stamps, and fewer collectors than for their postage cousins.  So while the plate blocks shown below do command a decent premium, there are plenty of stamps available to the revenue collector among these issues.
And for the quarter cent value of the proprietary series, there is lots to collect.  As you can see from the stamps below, the range of browns on this stamp varies dramatically.  The Scott catalog lists 5 different browns for this stamp: brown, red brown, yellow brown, orange brown, and bister.  In a future post I will try to match these color names to examples.  See if you can find these different varieties among the stamps below.
As with all the proprietary battleships, prices for the used versions of these stamps can vary dramatically based on the cancel applied to the stamp.  Printed, typed, and handstamped cancels from certain firms can command substantial premiums over the common versions of this stamp.  Examples of some of these more valuable cancels will be illustrated in a post in the next couple of days. 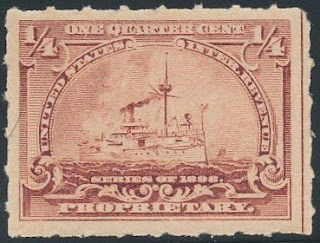 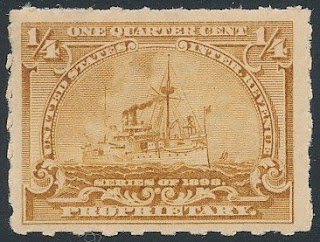 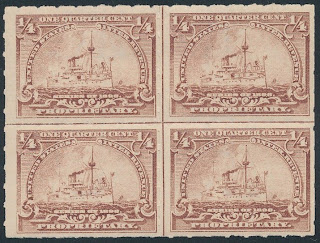 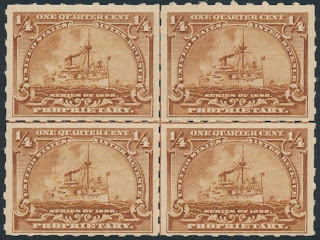 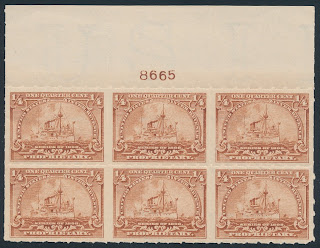 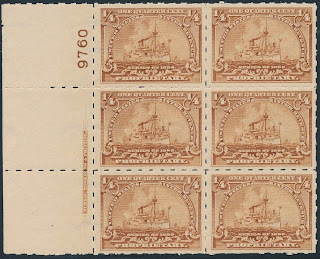 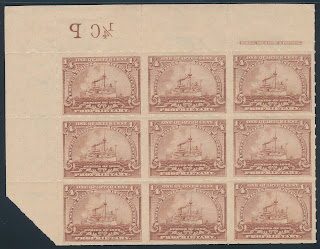