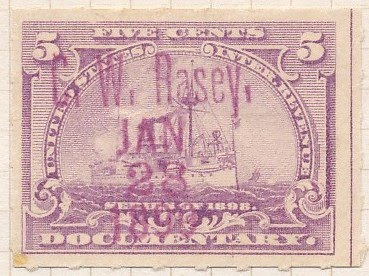 C.W. Rasey was the county recorder in Santa Barbara at the time of this cancel and must have used the stamp in his duties in that office.

"Charles W. Rasey. A well know and popular citizen of Santa Barbara, C. W. Rasey, President and manager of The Wright Abstract Company, has filled various positions of responsibility -- as a railroad man, as a county official, and for the past 14 years as the managing head of the above named land title company. He has always been held in high esteem as a public spirited man of ability and integrity...Coming from Colorado to California in 1881, he accepted a position with the Southern Pacific Railroad Company (then the Central Pacific) in its general passenger and ticket office in San Francisco, having been in charge of the apportionment, rates and divisions department in that office for six years. Leaving San Francisco in 1887, he came to Santa Barbara and became the Santa Fe Railway Company's passenger and ticket agent.

In January, 1895, Mr. Rasey resigned his position with the railway company to take up the duties of county recorder of Santa Barbara County, to which office he was elected in the Autumn of 1894...after having served the county in this important office for eight years and upon the expiration of his second term in 1903, he went into the office of the Wright Abstract Company as its manager...