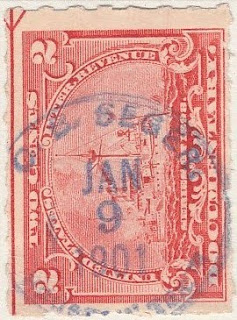 C. B. Seger was the auditor for the Southern Pacific Railroad in San Francisco in 1901.  It appears as though most railroad firms kept an independent auditor's office as many have a series of handstamp cancels for their auditor independent of their other operations.

C. B. Seger would go on to leave the Southern Pacific to eventually become President of the United States Rubber Company.