On Beyond Holcombe: Christan Xander

This edition of On Beyond Holcombe by Malcolm A. Goldstein is a part of a continuing series on the firms that used battleship proprietary revenue stamps: 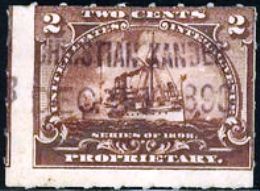 The number of cancellations involving the letter “X” on battleship revenues approaches zero, and the challenge of finding one to construct a philatelically based article around is daunting.  The RB27 cancelled by Christian Xander offers such an opportunity and this writer willingly embraces it, perhaps because his family name makes researching Christian Xander considerably easier than it would be to reconstruct the life of a John Smith whose life paralleled Xander’s in every detail.  Suffice to say, Xander proves an interesting subject.

The genealogical records are sufficient and reasonably straightforward enough to sketch the broad outlines of Xander’s life, providing just enough detail to tantalize.  He appears to have been born in Grossweier, a small town in the state of Baden in southwestern, Germany, quite near Strasbourg, France, on January 10, 1837 the son of an earlier Christian Xander and his wife Magdalena Zerr (Zirn), who himself was the son of an earlier Christian Xander and his wife Maria Jorger.  By 1864, he had emigrated to the District of Columbia, and on December 22nd of that year married Caroline Blume (Blum), also a German emigree born in 1848, at the Concordia Lutheran Church in Washington, D.C.  Although the online baptismal records of the Church (corralled and posted by the Mormon Church) show a male birth (Carl Hy) in September, 1865 and a female birth (Maria Wilhelmine) in December, 1866, he listed his two children as Henry born in 1866, and Mina born in 1868, in the 1880 Census.  Perhaps he simply did not remember his children’s birth dates.

Xander listed himself as a wholesale liquor dealer in that census, but as early as 1872, he was sufficiently established as a merchant to act as an incorporator for the Boundary & Silver Springs Railway Co, a trolley system for the District of Columbia, one of a group of visionary businessmen willing to invest to build the latest transportation improvement for the city of Washington.  However, in responding to a circular letter sent out by the Senate Finance Committee to the business community inquiring about the need for change in custom duties, Xander left a portrait in his own voice of the very small manufacturing portion of his liquor business as it existed in 1893.  As background, he explained that his winery had been established in 1882 and capitalized at $18,000. For the vintage year 1893, he manufactured approximately 10,000 gallons of  “sweet reds and clarets” worth approximately $15,000. Classifying the importance of his business, he affirmed that “[w]ine is a necessity for people of sense as a nutriment and hygienically.” Responding to a series of questions aimed at ascertaining the impact of the then current economic depression, now called the Panic of 1893, on his business, Xander affirmed that he had continued to run at full capacity, had experienced no increase in competition, and had produced more goods than in 1892 “because producing exceptional quality, the demand for it is increasing.” He employed six men at $12 to $21 per week and even sniffed: “[m]y wine-making business is for quality; I care not to sell my own product wholesale - they are above trade wines in quality.” As to his view on the customs duties which were imposed only on imports, he stated, since his trade was “local,” and he feared “no import, ... [his] recommendation [was] to leave things alone.” 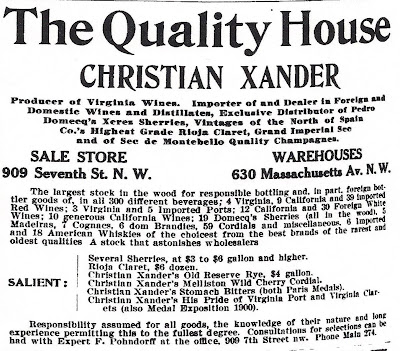 As a wholesaler, Xander gave a plug to one of his domestic champagne manufacturers in 1896, by issuing a hearty recommendation of its product as equal to the more expensive imported champagnes.  The manufacturer then printed Xander’s letter in a trade magazine with the following elaboration: “The Opinion of a Wholesale Dealer -  Christian Xander is the largest wholesale liquor dealer in the City of Washington, and enjoys the reputation of being one of the most careful and competent judges of wines in the United States.” Xander’s letter carefully explained that:

As many physicians constantly order your Imperial Sec for delicate patients it must be on their experience that your wine can conveniently take the place of the expensive French champagnes, which especially in the case of poor families, are rather inaccessible, and be the sickness ever so severe, your wine does take the place of the foreign brands with equal effect,

and effusively concluded: “You may use these, my assertions and experiences, for they testify simply to the high character of an honest wine.”  Xander was willing to carry the challenge to foreign imports even further by displaying his own quality wines at the Paris Exposition of 1900. 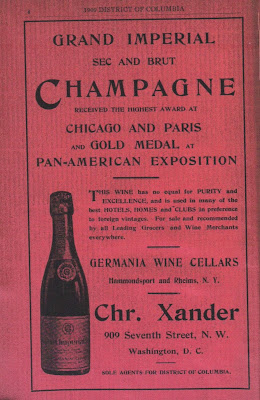 In 1905, Xander was regarded as a significant enough citizen to serve on one of the committees charged with organizing the Inauguration of President Theodore Roosevelt which took place on March 4th of that year.  However, the most revealing insight into Xander’s private life may be his long support of, and membership in, the Washington Saengerbund, a society dedicated to the promotion of German music.  His son, Henry, who often appeared as the society’s pianist, went on to serve as a longtime director of the group.  Xander died apparently suddenly on March 7, 1908 at age 71 and was buried on March 10, 1908.  His widow continued to make donations of wine to one of the local charity hospitals for years after his death.