On Beyond Holcombe: Oakland Chemical Company 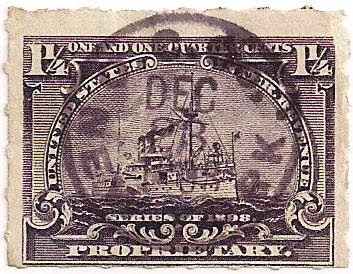 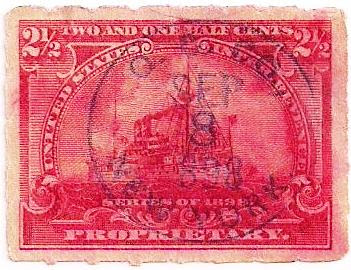 Beginning about 1881, the Oakland Chemical Co produced hydrogen peroxide in the United States and sold it as the company’s principal product, first under its generic chemical name and then later as Dioxogen, an appellation difficult for the company to defend as a trademark because Dioxogen was merely descriptive, but sustainable as a trade name against unfair competition, and, as such, useful as its product’s brand name from approximately 1901 to circa 1930. Quickly passing from the legalities of Dioxogen as a brand to chemistry, hydrogen peroxide is a cousin of water. Water’s chemical formula is H2O, a single oxygen atom bonded with two hydrogen atoms. Hydrogen peroxide’s formula is H2O2, two oxygen atoms bonded with two hydrogen atoms. While a hypothetical free oxygen atom in nature normally quickly forms a double bond with another free oxygen atom to become the chemically low-reactive oxygen gas, O2, the structure of hydrogen peroxide turns upon that oxygen atom forming only a single bond with the other oxygen atom and each of those two oxygen atoms also forming a single bond with a hydrogen atom. That single, rather than double, oxygen-oxygen bond gives hydrogen peroxide unusual properties. While it has turned out to be a normal, naturally occurring substance, present in virtually every cell at some point during the respiratory cycle, the existence of that extra oxygen atom in its structure makes it highly reactive. Collected in measurable amounts, because the release of the extra oxygen atom is so quick under certain circumstances as to cause burning, nowadays in low concentrations it is used as bleach and, in the highest concentrations, as rocket fuel. 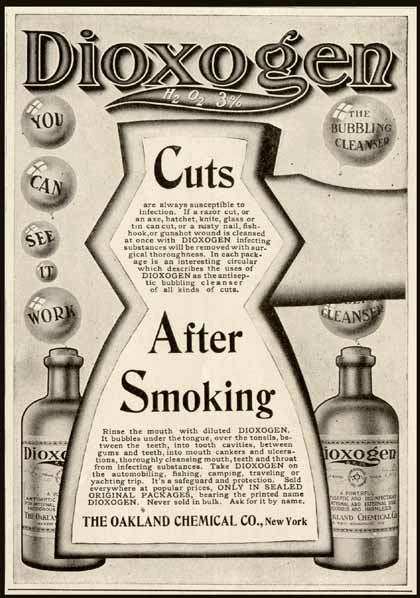 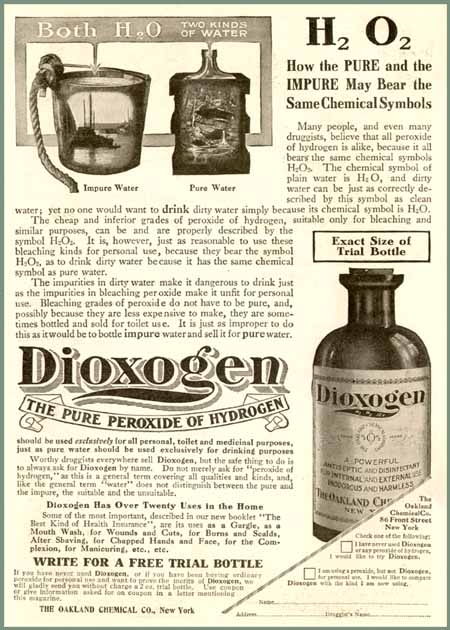 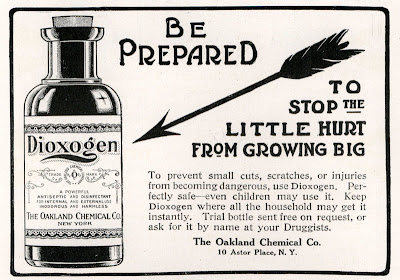 Presently, as in Oakland Chemical Co’s time, controversy surrounds hydrogen peroxide’s use as medicine. The approximately 3% hydrogen peroxide solution sold by the Oakland Chemical Co as Dioxogen was initially sold as a cure-all for everything, but gradually, under the general pressure of the medical reformers to rein in over-exaggerations, the company narrowed its advertising focus to promoting its use as a mouthwash and disinfectant. While current opinion still supports such use, modern research has slightly modified the usage rules. For example, while FDA guidelines accept hydrogen peroxide as mouthwash, prolonged use of hydrogen peroxide as mouthwash seems to actually damage and weaken tissue and, again, the oxidation accompanying its strict use as a wound disinfectant may cause scarring and slow healing by damaging newly forming skin cells. Thus, hydrogen peroxide should be classified not so much a disinfectant as an antimicrobial agent, particularly with respect to those organisms which are anaerobic and cannot survive in the presence of oxygen. As an antimicrobial, it is properly recognized as a germ fighter. Yet even today, curiously, outside of these narrowed strictures, a number of websites tout hydrogen peroxide almost as the miracle drug that Oakland Chemical Co first advertised it to be, capitalizing on its oxidizing properties, and claiming that its ability to capture “free radicals” makes it a potent defense against aging and less well understood conditions such as multiple sclerosis and even cancer. 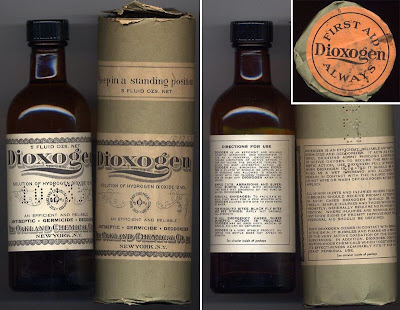 Aside from its abundant advertising, little factual remains on the record concerning the Oakland Chemical Co as a working business. It began operations in Brooklyn, NY and later moved its main office into Manhattan. Its factory was in the Rossville section of Staten Island and the site is considered today by some to be a toxic dump. Among its officers, only two can now be traced even slightly. One officer, H. M. Horr, its sales manager around 1910, left columns on the art of advertising in a printing trade journal, on such subjects as individualizing stock advertising circulars by personalizing the creation process. Horr suggested selecting one name from each group of customers on a mailing list and writing the circular as if it were a personal letter directed to that person. By this means, together with terse prose and keeping the number of issues addressed narrowly focused, the copy writer could capture the specific needs of that particular group of customers. To get around having the circulars look generalized and generic, he recommended specially printing them in type resembling typewriter type, then individually adding the addresses to the circulars by typewriter, and employing women to mass sign them to complete the personal feel: “Sign your letters with pen and ink. Cost too much? Why I have employed girls who sign letters with a good business signature from 1500 to 2000 per day at 75 cents per thousand, when the printer usually charges 50 cents per thousand for facsimile impressions.”

The identification of the other officer comes from the Congressional Record, which reproduced as part of a War Department report, a letter submitted by the other officer, one Daniel E Rianhard, who was the Staten Island Plant Manager in 1912 and, in a letter submitted to the federal Army Corps of Engineers, Board of Engineers for Rivers and Harbors, concerning the widening of the Arthur Kill Channel between Staten Island and New Jersey, supported the initiative on the grounds that it would make transport of its raw materials and finished goods easier. This person may, or may not, have been one Dane E. Rianhard, a longtime resident of Staten Island (1858-1927) who seems to have been a charter member of the Staten Island Cricket and Baseball Club as well as an avid proponent of early automobiles. Concerning the fate of the company’s product, Dioxogen, the name appears most recently to have been owned by another battleship revenue cancel user, the Henry K Wampole Co of Philadelphia (also to be visited by this series of articles in due course), but the circumstances under which the transfer of ownership occurred are not presently known. In any event, both Dioxogen and the Oakland Chemical company disappear from the published historical stream about the year 1930.