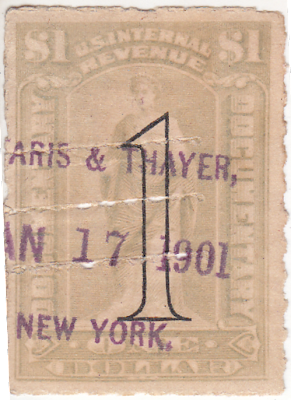 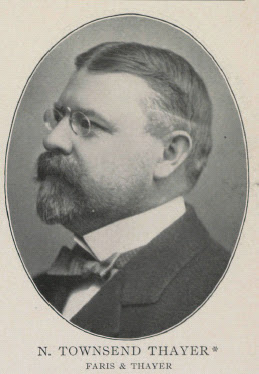 Mr. Faris and Mr. Thayer were both members of the New York brokerage firm Henry T. Godet & Company when it failed in 1890.  Mr. Godet had died in 1887, and with the failure of the firm in his name three years later, it appears that Faris & Thayer then created their own firm, in their own names.
However, Townsend Thayer went into business with new partners by 1904, almost certainly a brother among others, but then the firm Thayer Brothers & Company failed in September 1907.  The failure of Thayer Brothers would preceed a calamitous banking and stock market crash in October 1907.  Again, as with the panic of 1901, J.P. Morgan stepped in to help stabilize markets and the banks.
The 1898 Revenues economic era was one of market booms and busts that occurred with fequency and severity.  The irony of modern New York bankers and brokers taking endless bailouts from the US Treasury for their own stupid decisions, and now rebuffing and lobbying against regulatory attempts to prevent further crises like the one of the past few years is predictable for the most cynical of reasons.  While New York capital has functioned as a bedrock for industrialists throughout the world, it in no way represents a perfect market.  We can only hope that cool heads prevail in the regulation of the greatest industrial capitalization engine the world has ever seen.  Any great talent also needs discipline and control.  Financial markets are no different. 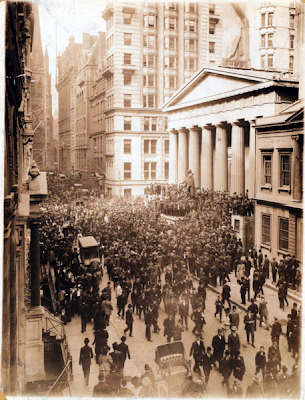 Wall Street, October 1907 during the "Bankers Panic"
Posted by John Langlois at 6:00 AM