It's been more than 3 months since my last submission to 1898revenues; a longer hiatus than planned. While I look forward to continuing to explore the application of the war tax law by blogging more about on-document usages of the 1898 revenues, I must say I've enjoyed the current series about New York Stock broker cancels.
Those blogs demonstrate the breath of opportunities 1898 revenue stamps offer collectors. Kudos to Dave Thompson and John Langlois for pursuing them. As a way of segueing into blogging about on-documents usages again, I thought I'd appropriate show and discuss some actual sales memoranda from some New York stock brokers. 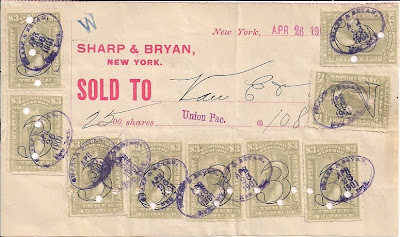 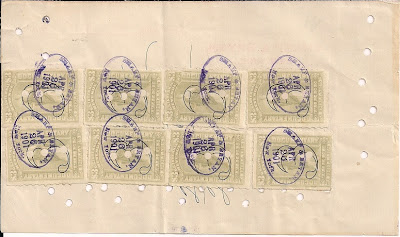 Here's a sales memorandum for the resale of 2,500 shares of the Union Pacific Railroad stock properly taxed $50 with sixteen $3 and one $2 gray Commerce overprint issues (eight of the $3 stamps are on the reverse). The tax rate for the resale of stock was 2 cents per $100 of original stock value, so the $50 tax indicates that each of the 2,500 shares sold here for $108 had an initial value of $100. So the total value of this transaction was $270,000!
That Sharp & Bryan used lower dollar-value documentaries to pay the tax suggests this may have been an unusually large transaction for them. It also suggests they didn't stock, no pun intended, high value stamps, an expensive proposition for any company.
Whoever prepared this memorandum went to great lengths to keep the information about the sale unobstructed. First they encircling the critical information on the form with $26 in tax stamps, putting the remaining $24 in tax on the reverse.

All the stamps are both punch and handstamp cancelled. The stamps on the front of the document were affixed, then handstamped, and then punched. One can ascertain this by noting that the punches cut through the handstamp cancels, the stamps, AND the document itself. Note that each stamp is punched 3 times in an irregular pattern, suggesting each punch was done separately.
The sequence for the stamps on the reverse was different. Each stamp was affixed to the document separately but only after FIRST being punch cancelled. Unlike the stamps on the front the punch cancels ALL appear to be in a regular pattern suggesting that the eight indivdual stamps were "stacked up" then punched. Why? Again, whoever produced this memorandum seemed to be trying to insure that the information about it wasn't obliterated which might have occurred had the stamps been punch cancelled after being affixed.

I only noticed this when looking for the best cancel to illustrate as a detail. As the arrow in the illustration below shows, unlike the stamps on the front, the handstamp cancel was applied only after they were both punched and then affixed to the document because the holes in the stamps on the back don't cut through the document and the handstamp cancel shows in the area of the holes; note the "R" in "APR".
The stock market panic of 1901 took place on May 17, 1901, just 3 weeks after this sale. The speculative antics of Union Pacific's chairman E. H. Harriman and others interested in gaining control of the Northern Pacific Railroad reportedly caused that panic. Perhaps this April 26, 1901 sale representing $270,000 was part of the pre-panic speculation which involved the stocks of many railroads including the Union Pacific. That Sharp & Bryan had a "Union Pac." handstamp cancel suggests they actively traded the stock and may have had a folder of pre-handstamped forms ready for Union Pacific sales. Assuming there hadn't been a prior resale, the seller made $20,000 over stock's $250,000 face value, a tidy sum in 1901! 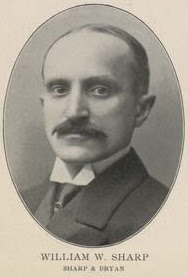 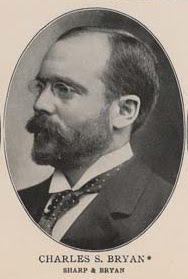 The Sharp & Bryan firm was established in 1891. They were forced to suspend trading temporarily in August 1903; however they apparently recovered as I found an additional 1907 reference to the firm.
Posted by Frank Sente at 6:38 AM