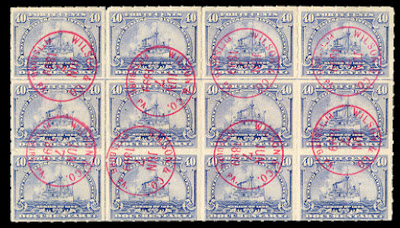 4X3 Multiple of R170
Lot #261 in the November 18-19 Spinks Shreves Galleries Auction
Est. $200-300
2011 Scott Catalogue value for a block of 4: $52.50
From the lot description:
#R170, 40c Blue lilac, rouletted 5½, used block of twelve (4x3), cancelled with bright red Wilson & Co., Pittsburgh, Pa. June 7, 1899 c.d.s.'s, some perf. separations and a few hinge reinforcements, very fine and attractive; this is the largest recorded multiple of #R170, the next largest being a strip of ten.
*****
The strip of 10 that Spink Shreves refers to can be found in the inventory list of The Curtis Collection.  A scan of that strip can also be found below.  The block of 12 offered in the sale is certainly rare, though I wonder if there are not larger blocks of this stamp out there somewhere.  I submitted a scan of a used block of six of R172p, the slot perfed 80 cent documentary, to The Curtis Collection, and it remains the largest multiple recorded.  I have to believe that there must be a larger multiple out there somewhere. 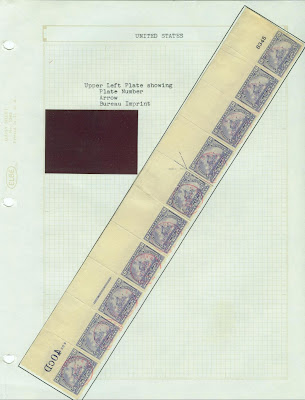 R170 strip of 10 referred to in the lot description.  This scan can be found at the website of The Curtis Collection.  The site reports this strip as ex-Joyce.  Like the block of 12, this strip was also cancelled by Wilson & Company of Pittsburgh.

WILSON & CO.
JUN
7
1899
PITTSBURG, PA.
Dave Thompson sent a scan of a R173 with a Wilson & Co. of Pittsburg cancel.  To date, I have yet to trace much on the firm of Wilson & Company in Pittsburgh.  Please send any infomartion you might have about this cancel and the company that made it to 1898revenues@gmail.com. 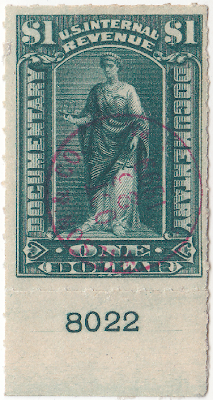 WILSON & CO.
OCT
23
1899
PITTSBURG, PA.*
*A note on the spelling of "Pittsburg".  For most of its history, including the present, the City of Pittsburgh was spelled with an "h" at the end.  A declaration by the United States Board of Geographic Names stated the spelling of the city should not have an "h" at the end, so from 1890 to 1911 the city was spelled "Pittsburg".  Hence the spelling on the R170 cancels above is correct.  The official spelling reclaimed the "h" in 1911 after citizen petitions.