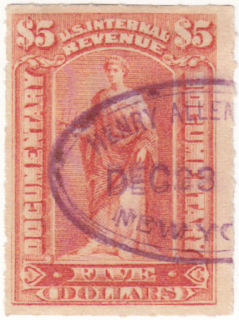 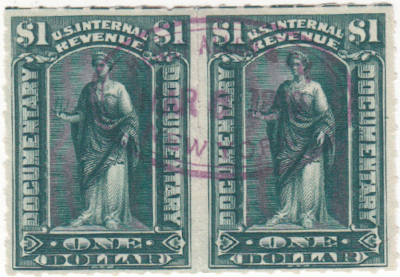 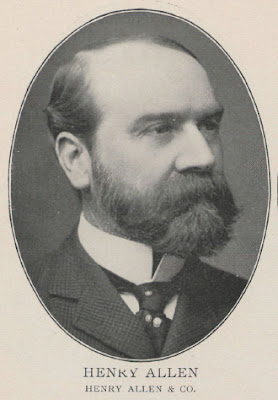 Herny Allen & Company failed in 1893 as a result of the insolvency of the National Cordage Company, a rope making firm that was organized in 1887.  Mr. Allen clearly pulled himself back together and was trading again by 1898.  In 1893, though, Allen believed the NCC responsible for his failure:

Henry Allen & Co., brokers at 31 New Street, who failed recently, will bring criminal suits against members of the National Cordage pool, and they charge officers of teh National Cordage Company with obtaining from them a large sum of money by misrepresentation both as to books and statements of the financial condition of the company.

To a reporter for The New York Times Mr. Allen said yesterday:

"We hae waited for three months for the officers of the National Cordage Company to settle their indebtedness to us.  They have shown no disposition to do so and we are tired waiting.  The matter will be put in the hands of the District Attorney and charges of a serious nature will be made.

"What the charges are specifically, I do not care to state, nor will I name the men who will be accused.  If they had paid us as they agreed to do, we would not have failed."

The Cordage pool carried on its operations through the Henry Allen & Co., and the break in cordage May 4 was followed immediately by the downfall of the brokers.

Allen & Co. managed to rally, but never got back the money claimed to have been advanced to the pool to carry the heavy blocks of Cordage it was necessary to hold up the price and stave off the impending crash.   The amount involved is said to be $670,000.

President Waterbury of the National Cordage Company declined yesterday to say anything about the suit.  E. C. Loper, one of the receivers appointed by Chancellor McGill said:  "I owe Allen & Co. nothing as far as the lare sums spoken of are concerned."

Mr. Thalman of the Committee of Reorganization said: "This suit is not an important matter, for, as far as I know, Mr. Waterbury owes nothing to the firm of Henry Allen & Co."


*****
The bankruptcy of Henry Allen & Company would be the least of Mr. Thalman's problems.  Not long after the crash of the NCC, the stock market would crash and would affect the wider United States economy.
Posted by John Langlois at 6:00 AM