Screen capture after the October 20, 2011 close of an auction for hundreds of used 1898 dollar documentaries.  The lot sold for $331.
A couple of months ago I began to publish posts on a regular basis of handstamp cancelled 1898 dollar documentaries.  These stamps have never attracted much attention.  Try asking for dealer stock at stamp shows of these stamps.  Dealers normally don't haul them around because of their relatively low value and the low demand that surrounds them.

But something odd happened about a week ago on eBay.  A lot of these stamps, albeit a big one, just sold for more than $300.  The retail value of these stamps hardly reached the $300 final price, yet there was clearly a bidding competition for this lot between at least two buyers.  Why are these stamps hot?   I certainly could use a number of them to complement my existing work on the site.  Dave Thompson has been very helpful with his contributions of scans, but the balance of most of the material going up comes from my collection.

Here are a few close-ups of the lot: 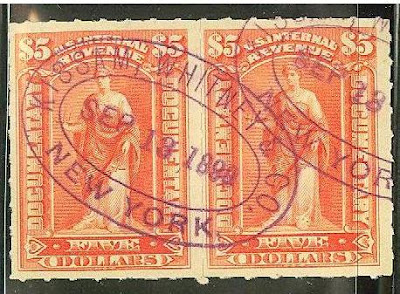 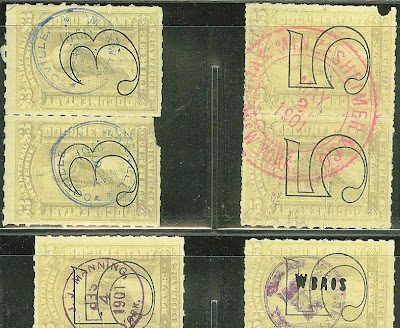 The stamps above represent the following New York brokers:

Maybe this site will get a shot at studying these cancels.  Who is the buyer of this lot?
Posted by John Langlois at 6:01 AM