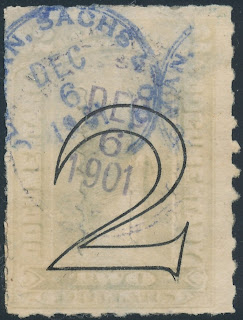 GOLDMAN, SACHS & CO.
DEC
6
1901
This blog generally doesn't review current events or get political.  But I was thinking about the cancels in my collection as Goldman Sachs defended itself on Capitol Hill today.
"Too big to fail" became a common expression as the government began to deploy US taxpayer money to stave off a full meltdown of the US economy.  Some poorly managed companies as a result got fed a ton of money, like AIG.  Goldman Sachs never really needed much help though.  Now we know why.  They were well managed in a way that Adam Smith's invisible hand provided no protection to the US or international public.  Goldman Sachs bet against itself, some of its investors, and the general health of the US economy when it hedged its bets by essentially shorting the mortgage market.  Today, executives of the venerable firm are defending themselves and the company's actions and forthrightness in front of the Senate.
If you haven't seen any of the hearings, do so.  You can view them at the CSPAN website.
Posted by John Langlois at 1:00 PM