I have run this1898 revenues site for a little over one year and I have only made irregular attempts at posting any stamps from the proprietary series of battleships.  This is about to change.

Below is a short summary of the US revenue law requiring these stamps, and the usage requirements for these stamps.  During the spring and summer I will begin to roll out a more thorough presentation of the proprietaries, and I will focus on printed cancels.

For those of you interested in other 1898 proprietary material, I recommend Robert Mustacich's specialty site for battleship handstamp cancellations.  Mr. Mustacich produced the reference tome on these cancellations, entitled The Battleship Desk Reference.  It is a must for any serious 1898 collector, though he has been gracious to put his corporate cancel database online.  It can be accessed at his site: http://www.battleship-revenues.com/.

With regard to the law requiring the proprietary battleship stamps:  Section 6 of the United States War Revenue Law of June 13, 1898 provided for the collection of taxes under Schedule B on medications and other so-called "proprietary articles" using adhesive stamps. The 12 'battleship" proprietary stamps were designed, printed and sold for the payment of the taxes under the US War Revenue Law.

Articles taxed under proprietary Schedule B were taxed at the following rates:

Sparkling wines like champagne were taxed at a rate of 1 cent for containers of one pint or lest and 2 cents for a bottle of more than one pint.  The sparkling wine tax was a major use for the one and two cent proprietary stamps. 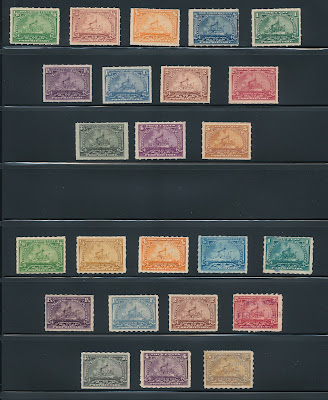 The above image includes a complete set of the rouletted proprietaries on top and the hyphen-holed proprietaries on the bottom.  Click on the image to see a larger version.
These stamps were usually applied to the products after they were ready for sale.  Each stamp was supposed to be cancelled by the manufacturer or seller with initials and the date of the cancel.  The legal requirement to cancel these stamps with identifying information of the manufacturer has created a boon for collectors, and has allowed people like me to specialize in cancels as much as the stamps themselves.
Posted by John Langlois at 9:00 PM