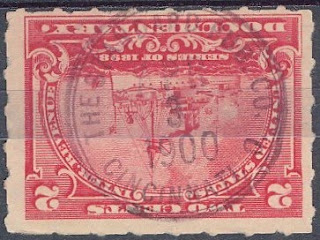 THE STANDARD PUB. CO.
APR
3
1900
CINCINNATI, O.
The Standard Publishing Company is a Christian subject publishing firm that remains in operation to this day in Cincinnati.  Find them here: Standard Publishing link.
This history of the firm comes from Standard Publishing's website:
For more than 135 years, Standard Publishing has been serving the Christian community with products that have but one purpose: bringing the Bible to life!
Standard Publishing’s rich heritage has its roots with a group of physicians, attorneys, educators, preachers, and James A. Garfield, who would later become the twentieth president of the United States.
In December 1865 this group met at the home of T. W. Phillips, a noted businessman and philanthropist in New Castle, Pennsylvania. They met to consider launching a journal that would be “devoted to New Testament Christianity.”
The group organized a publishing association, funded it with $20,000 in capital, and named the journal Christian Standard. Isaac Errett of Detroit, Michigan, was named the first editor.
The first issue came off the press dated April 7, 1866.  After a year, funds were exhausted, and the founders wanted to shut the business down. Errett wasn’t ready to give up yet though. So the original investors gave him the journal—and all its debts!
Errett continued as editor, even as he became president of a new college in Alliance, Ohio, in 1868. Soon the situation began to improve:
The new company became a leading publisher of church resources:

A new chapter in Standard Publishing’s history began in July 2006, when the Wicks Group, a New York-based private equity firm, acquired Standard Publishing. With Standard Publishing as the platform company, the business is poised to grow both organically and through acquisition.
In 2007 the company moved to attractive, modern offices on the north side of Cincinnati, where it continues to provide resources for the church around the world.