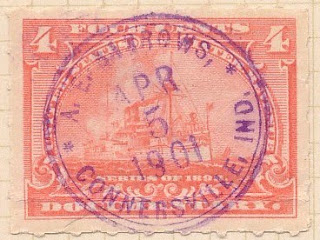 Milutus Barrows, the father of the subject of this sketch, was twice married, first to Lucretia Gray, and afterwards, when she died, leaving a family of small children, to her sister, Lucina Gray, who was the mother of Alvin E. Barrows. When he was about seven years old, the family moved from near Dorset, Vermont to Chautauclua county, New York, and were residing there at the outbreak of the war. In 1861 Alvin was employed on an oil derrick, just over the line in Pennsylvania. His father had been more or less active in the abolition movement and upon the call for seventy-five thousand volunteers he quit his job and went home for permission to enlist. At the battle of Fair Oaks, Virginia, he was severely wounded, barely avoiding the amputation of his left leg at the knee. In the same year he was again wounded. At the battle of Chancellorsville, where he was taken prisoner, he was officially commended for conspicuous bravery. He served a short time in Libby prison, but his conduct had won for him such attention as secured his speedy release. He served in the army more than four years, in the Seventy-second, One Hundred and Twentieth and One Hundred and Twenty-sixth New York Volunteers. When the war was over, he returned to his home in New York and attempted to do carpenter work and farming. This his lameness made impossible, and he drifted into mercantile pursuits, being for a time employed in the general mercantile business, but very soon turning to the business of writing life and, later, fire insurance. For forty years he was a successful fire underwriter, never ceasing this activity until on June 9, 1913, he was stricken down at his desk. In 1881 he left West Farmington, Ohio, where he had commenced in the insurance business, coming to Connersville, Indiana, and purchasing the insurance agency of Ignatius Zeller, forming a partnership with Charles B. Sanders, under the firm style of Sanders & Barrows. Until 1884 this partnership continued, when it was succeeded by the firm of Fearis & Barrows, which continued until 1887, when Col. J. H. Fearis withdrew to move to Minneapolis, Minnesota. Mr. Barrows then associated himself in business with the late Charles Mount and the late Major Francis T. Roots, under the firm name of Mount, Roots & Barrows. The interest of Messrs. Mount and Roots was bought later, and for a number of years he did business under his own name until he transferred his business to the corporate form in which it now stands, The A. E. Barrows Company, with himself as president and treasurer and his son, Frederic I. Barrows, as secretary. It has thus continued for a number of years. In 1887 Mr. Barrows closed up the affairs of the stocking mill, acting as assignee of the Keatley Stocking Company. At the inception of the Fayette Banking Company he was one of the original partners, continuing with it and its successor, the Fayette National Bank, until 1906, when he sold his stock and became the vice-president of the Central State Bank. Later he succeeded to the presidency of this bank and was active in the discharge of his duties until the beginning of his last illness.

For many years Mr. Barrows had been a close friend of the late William Newkirk, by the terms of whose will he was made joint executor with James M. McIntosh, of Indianapolis, a trust which he was executing up to the time of his death. Perhaps the business activity which brought him in closest touch with the people of Connersville was his long and honorable service as a building association officer. Mr. Barrows was a pioneer in Connersville in providing means for home building to persons dependent on weekly savings. In 1886, with Dr. A. M. Andrews, Thomas Downs, R. G. Wait and others, he organized the Connersville Building and Loan Association. This was an association of the old style where all the shares matured at one time. It was organized with a very limited membership and with great difficulty because there was local prejudice against building associations. The association of which Mr. Barrows was always the secretary, was so satisfactorily managed that a year later a series association, the Fayette Savings and Loan Association, was established. As the first association met in Mr. Barrows' office on Monday nights, the new association met on Tuesday, for he was secretary for both. More than a quarter century has passed since the first association was organized and as it paid out it was compelled by its charter to disband. The second kept on maturing some twenty-five series, until, at Mr. Barrows' suggestion, it modified its rules to adopt the individual or perpetual plan. It now has assets in excess of half a million dollars, a monument of faithfulness, persistence and prudence.

Mr. Barrows had been, during nearly the whole of his life, an active member of the Methodist Episcopal church and on its official board for about thirty consecutive years, being both a trustee and chairman of the board of stewards. Mr. Barrows was always an active Republican, though never an office seeker. He served two terms as township trustee because two of his good friends, Charles Roeh1 and Moses Kahn, tied for the nomination, and then withdrew and asked him to be a candidate as a compromise.

At his death, the editor of the Connersville News wrote the following personal tribute, under the heading ''A Worthy Citizen" "In the passing of Alvin E. Barrows from this stage of action, Connersville and vicinity loses from its social, its business and its industrial life a unit of striking outlines. Since 1881 this man had been an active, steady, certain force in local affairs. His early life, and his army record especially, offer some glimpses of a powerful character. These were fully sustained by the life of Mr. Barrows here, and they present but a single aspect of a temperament of more than usual distinctiveness. Perhaps no man in Connersville was clearer of any suggestion of effeminacy than was A. E. Barrows. Serious minded, his intellect bent itself, engine-like, to the work he set himself to do. The light, the frivolous, the foolish he would neither suffer in himself nor tolerate in others. His business in the world was to do things. Thus it came about that many a casual eye perceived the rugged husk which encased the actual man, and mistook the exterior for the entirety. Under the cloak of what might be taken for a blunt manner, there was a warmth of sentiment in A. E. Barrows which, undemonstrative as it was, was deep and earnest and forever in its place. Without the suggestion of ostentation, he was a deeply religious man. Without being loud, he was a patriot of the highest type. Without bold pretense, he was generous and philanthropic. Without a hint of weakness, he was no stranger to the truest and most enduring of affections. Thus it happened that Mr. Barrows' truest friends were those who knew him fully, rather than those who merely met him. But in the circle of those who were able to see and interpret the depths of his personality, he had such friends as men of superficial makeup never know.

"Rugged, tenacious, severely methodical and unbendingly honest. Alvin Experience Barrows long ago compelled for himself a high place in the affairs and in the eyes of men. This place, by the sheer might of him, he held to the end of his life. The recollection of his virile manner and uncompromising self-reliance somehow lends a peculiar depth of pathos, for whoever really knew him, to the realization that his work is done and that he is gone.
Posted by John Langlois at 12:01 AM