On Beyond Holcombe: Nelson, Baker & Company

Nelson, Baker & Co was among a cluster of prominent pharmaceutical companies located in Detroit, MI, although a latecomer on the scene. It was organized only in 1890, but by the Spanish-American War had become a large enough operation to utilize a whole array of cancels, including a profusion of type faces and layouts, on various values of the battleship revenues. Its principals were Edwin H. Nelson and William S. Baker, but its superstar was Dr. Albert Brown Lyon, whose scientific reputation transcended the company. 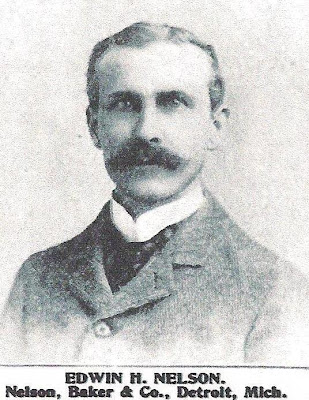 Edwin Horatio Nelson was born in Brighton, Ontario on June 27, 1856, during a time when his parents briefly resided in Canada. His father was born in Ireland and his mother was a member of the ancient and honored Thayer family of Massachusetts. Shortly after his birth, the family moved to Arkansas where his father owned and operated a plantation before the Civil War. A turn of the (20th) century biographical sketch of Nelson tactfully mentions that the plantation was used by the Union army as a hospital during the Civil War, after which his parents retired to Canada. Nelson was educated in Canada and graduated from the Ontario College of Pharmacy in 1876. His life’s path was set when he moved to Detroit to work for the oldest of the pharmaceutical houses in Detroit, Frederick Stearns & Company (a definite subject for a much longer piece in this series). He worked for Stearns until he became the young and brash President and Chairman of the Board of the new company. By 1907, along with his ownership of N B & Co, he was also a director of the newly formed National Bank of Commerce in Detroit as well as a director of the National Can Co. In a biographical sketch, he characterized himself as a Republican, Episcopal, and a member of prominent business and social organizations in Detroit, including serving as secretary of the Detroit Club in 1907. His son Frank Thayer, born in 1887, won the silver medal in pole vaulting as a member of the US team at the 1912 Olympics. Unlike his father, Frank, as an Olympian, merits his own stub Wikipedia entry and a picture of his medal winning pole vault is displayed there.

The Baker of N B & Co was William S. Baker, born in New York State in 1861. Apparently never significant enough to be profiled in the contemporary biographical puff books of Detroit’s prominent businessmen, his role is mentioned only once in connection with N B & Co, in a description of its operations published in an 1894 trade journal. He is portrayed there as being a canny pharmaceutical salesmen, who had woeked as such for fourteen years ( perhaps also for Stearns) before he became part of N B & Co. He served as N B & Co’s treasurer for ten years or more, although by 1910, he had relocated to Chicago where he spent the next decade. In 1930, he and his wife were living with their daughter’s family in Seattle. As with many, even most, other second names in company titles, he seems to be overshadowed in collective memory as well as in life by the lead name.

Dr. Albert Brown Lyon served as supervising chemist and corporate secretary for N B & Co, from 1897 to his death in 1926, but his reputation today primarily rests on his treatise and compendium on plants published in 1900, apparently still a popular reference guide. Born in 1841 to one of the pioneer missionary families in Hawaii, he moved back and forth between the islands and the mainland before finally settling in Detroit. His Lyon ancestors landed in the New World in 1635, and his mother’s family descended from religious dissenters who accompanied Roger Williams to Rhode Island after he was expelled from the Massachusetts Bay Colony. When Dr. Lyon’s father was buried in Waimea Hawaii in 1886, the King of Hawaii himself sent a Hawaiian flag to use as his winding sheet, because he had heard the old man say: “Fifty years have I lived under your flag ... I wish that when I die I may be wrapped in the flag I loved.” Published in 1905, the three volume Lyon family anthology, for which Dr. Lyon acted as chief editor, as well as relating that story, included his father’s favorite hymn translated into Hawaiian.

Dr. Lyon, himself, was educated at Hawaii’s most famous private school, Punahou, and attended college at Oahu College for two years before graduating in 1865 first in his class from Williams College in Massachusetts. He studied medicine at University of Michigan and earned his M.D. in 1868. Immediately following graduation, he became a chemistry professor at Detroit College, where he spent the next twelve years before becoming a consulting chemist to Parke, Davis & Company (another Detroit powerhouse which will be visited again in these columns) in 1881, and then editor of the trade journal Pharmaceutical Era in 1887 (a significant information source for these columns). In 1887, Lyon also published a handbook for analyzing drugs and galenicals (standard preparations of medicines which contain organic substances) which brought him renown as a chemist. In 1888, he returned to Hawaii as the government’s chemist and a professor of various sciences, including physics, as well as logic at Oahu College. When Hawaii became a republic, he served for two weeks as a militiaman in its Citizen’s Guard in 1895, as his biographers ever after proudly noted. In 1900, he was chosen as one of twenty-five chemists named to conduct the decennial revision of the United States Pharmacopoeia. His wife, whom he married in 1878, was born in Wisconsin, but Dr. Lyon could trace her ancestry back through his minister father-in-law (who performed their wedding ceremony) to the Puritans John Alden and Miles Standish. He had two children both of whom matriculated at his medical school alma mater, the University of Michigan. His daughter, after graduating Phi Beta Kappa, ran a missionary school in China and his son became a language teacher at University of Michigan. He belonged to various scientific and professional societies, was a deacon of his church, as he had been in Hawaii, and was a staunch Republican. 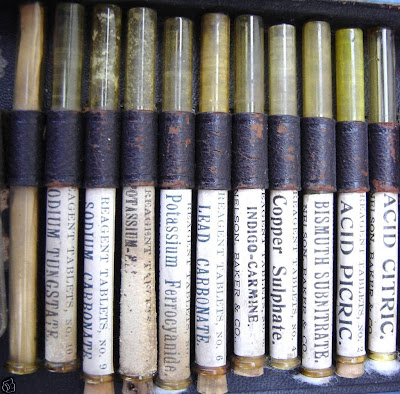 N B & Co erected its own laboratory in Detroit in 1893. In 1909, at a time when the original building had been greatly expanded, the company employed more than 400 people, including 70 traveling salesmen. According to a contemporary book trumpeting the important businesses of Detroit, it manufactured a “full and complete line of pharmaceutical preparations and the products of the establishment are recognized by the trade and by the medical profession in general as being of a superior order.” While its profusion of cancels attests that N B & Co was manufacturing lots of different products, there is no single product with which it is most strongly identified. A trade card offered the product Bromo-Laxine for coughs, colds, headaches and neuralgia, but the products themselves suggest everything from Seidlitz Powder (a generic cathartic) to urine testing kits for professionals. The company successfully remained in business, with Frank Nelson, who became an attorney after the 1912 Olympics, becoming Vice-President upon his father’s death in 1932. Although Frank lived on until 1970, in 1950, N B & Co was combined with Penslar Corporation, another small Detroit pharmaceutical company founded in 1910, and both were purchased by the Purepac Corporation, still today a manufacturer of generic drugs. 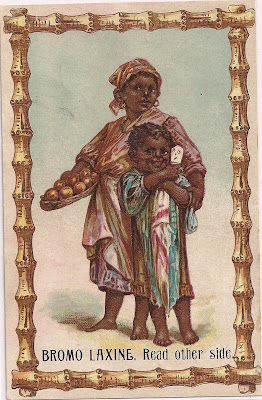 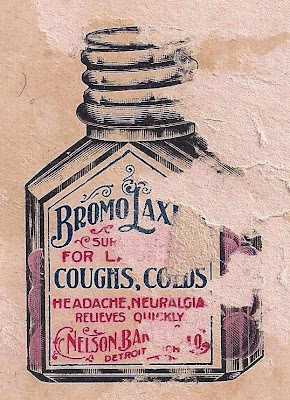 The Nelson, Baker canceled battleship stamps below are from the former collection of Henry Tolman.  From Mr. Tolman's organization of the types it is clear that he was still working on coming to final terms with the cancel varieties: 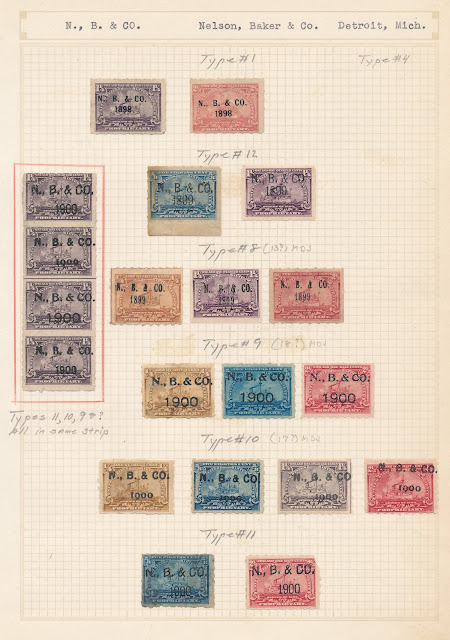 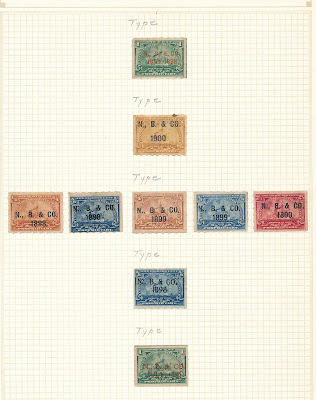