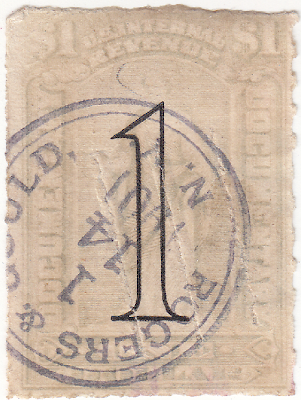 IT is a far cry from Smithfield to Wall Street, and from the days of Bloody Mary to the present. Yet such are the curiosities of descent that we shall find a direct ancestral link, or chain, between the two. The family of Rogers has long been a prominent one in England. It has produced many men of distinction in various walks of life. Few of these are better known than John Rogers, the fii'st of the Marian martyrs. He was a Cambridge student, the translator of the " Matthews Bible," and a London rector. Immediately after Queen Mary's accession to the throne, he preached a vigorous sermon against Roman Catholicism, which proved practically to be his own funeral sermon. He was forthwith arrested, kept in prison for some time, and then pubhcly burned at the stake at Smithfield, the first of the long line of martyrs of that reign.

Of such ancestry was the Rogers family which was at a later date transplanted from England to New England, and which has played no small part in the development of this nation. In the last generation Edward Y. Rogers of New Jersey is well remembered as one of the leaders of the bar and a prominent politician.  He was an " Old Line Whig," and then, following the lead of Horace Greeley, became a Republican, and was a conspicuous member of the National Republican Convention at Chicago in 1860, at which Abraham Lincoln was nominated for the Presidency of the United States.

The subject of this sketch, Edward Leighton Rogers, a son of Edward Y. Rogers, was born at Rahway, New Jersey, 1850, and, after being educated at private schools, he subsequently developed an inclination toward business, especially toward finance. At the age of twenty years, therefore, he sought and found an
engagement in Wall Street, and from that time to the present has been contiuiiously occupied with the fascinating operations of that great center of finance and speculation.

It was in 1870 that Mr. Kogers entered Wall Street. Five years later he became a member of the New York Exchange, and thus qualified himself for full participation in all the operations of the Street. For some years he worked alone, with gratifying success, and steadily built up a reputation for integrity and skill.  In 1885, however, he formed the firm with which he is now identified, under the name of Rogers & Gould. Mr. Rogers is the head of it, and his partners are William S. Gould and Alexander H. Tiers, with Charles T. Barney as special partner. Mr. Barney is president of the Knickerbocker Trust Company, and is a tower of strength to the firm. The firm of Rogers & Gould is well known in Wall Street, and conducts a large and profitable volume of brokerage business.

Mr. Rogers has devoted his attention, in a business way, exclusively to his Wall Street operations, and accordingly has not identified himself with any outside corporations or enterprises.  Neither has he held nor sought pubhc office, but has confined his pohtical activities to discharging the duties of a private citizen.

Mr. Rogers is not widely known as a club-man. He is, however, a member of the Century Association, one of the most desirable social organizations in New York.
Posted by John Langlois at 6:00 AM