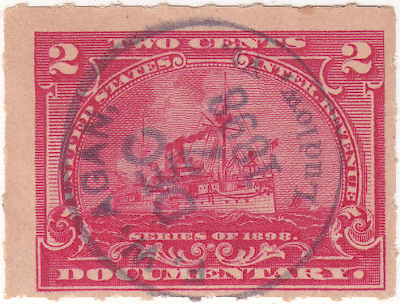 
Mr. Agan was the inventor of an early vacuum cleaner, albeit one that required two users, one to operate the cleaning end and another to drive the wheel that powered the pump that created the suction (and to stick the expectorating end out the window).


The following text comes from a Blog about the graduates of Vermont's Black River Academy.  The original post can be found here.

The Agan Vacuum – A Precursor of Modern Automation


(The following is the first in a series of articles on the contributions made to society and the world by alumni of Black River Academy (BRAM) in Ludlow, Vermont. While Calvin Coolidge is its most renowned alumnus, there were many others who made lasting contributions. This is an effort to recognize them. We plan to update this list of BRAM alumni monthly.)

Frank W. Agan was born in Plymouth, VT., December 18, 1868. He attended the common schools and the Black River Academy in Ludlow. June 10, 1896, he married Cora A. Safford, daughter of the late Major Darius Safford of Morrisville, Vt. She passed away August 26, 1988. In 1897, Mr. Agan commenced the manufacture of the shoddy, the first industry of the kind ever established in Ludlow.

The Agan vacuum cleaner was created by Agan in Ludlow, Vermont sometime in the late 19th or [early] 20th century. The Agan Vacuum is an important symbol of the Gilded Age. As technology and innovation spurred on the Industrial Age, wealth increased and as a consequence a new class developed. With a vast amount of buying power, many new products appeared to meet the demands of this new class, especially its women. Society demanded that women present their homes as a model of their husband's wealth and influence in the work place and with disposable income on the increase, washing machines, stoves and vacuums all represented this wealth. Meant as 'labor saving devices' these new products also opened up some ''leisure time' allowing women to spend time on volunteering in their communities and focusing on other aspects of their roles as mothers and wives. The museum has in its collection a hand operated vacuum and a power operated vacuum made by Frank.

What is fascinating about Mr. Agan's career, however, is the breadth of his interests and scope of his involvement in community affairs. He was involved in Vermont politics, narrowly being defeated for Lt. Governor in 1902 in what the New York Times described as "the hottest political campaign in the history of Vermont". He began his career in the mills of Ludlow, eventually owning a shoddy mill ("shoddy" was wool produced from reclaimed wool).

He managed to find time to be President of the Ludlow Telephone Company, a Trustee of the Village of Ludlow, a principal in a medical equipment company, a school board member, and an active Mason.

But history will best remember him for his vacuum cleaner. Meant to be used by two people, one to crank the wheel in order to generate the suction and one to clean with the wand or head of the vacuum, this labor saving device collected dirt as well as dust in one hose and transferred it to the second so that the refuse may be placed out the window. As new technology, this vacuum was an innovation of its day and it enabled women or their servants to clean rugs, furniture and hardwood floors. The non-electric wheel type vacuums, such as the Agan, were in great demand until the electric replacement came onto the market also in the early 20th century.

In their day, wheel operated vacuums approached the cutting edge of early technology. They exhibited a sophistication that was not present in earlier vacuum designs. This style of machine provided powerful and continuous suction for its user. The increase in vacuum even allowed for larger diameter hoses and bigger cleaning tools. Typically, one person cranked the wheel while another cleaned with a wand or hand tool.

Mechanical advantage was achieved through the use of belts and pulleys. The hand, or power wheel, was set into motion with a cranking handle. The large wheel drove a belt that also went around a much smaller pulley. The small pulley was fixed to a shaft which would spin a fan or pump a set of bellows. These machines were used effectively until the early electric vacuums became popular.

The Agan Vacuum.  Made in Ludlow, Vermont.

The twin set of belts gives this machine tremendous mechanical advantage. Suction is generated by a fan chamber in the center of the machine.