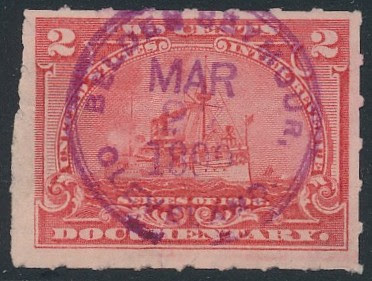 
This cancel was made by Belden Seymour, the son of another Belden Seymour, also of Cleveland.  Both were prominent businessmen in Cleveland, with the younger running businesses established by his father.  The biography below gives an indication why the younger Mr. Seymour might have cancelled this stamp:


A History of Cleveland and Environs:  The Heart of New Connecticut, Volume II
The Lewis Publishing Company, Chicago and New York, 1918


Belden Seymour the elder was one of the business men of consequence and a citizen of high social standing in Cleveland until his death thirty years ago. He was a resident of the city forty-five years, and his name is associated with many important enterprises of the time.

He was a descendant of the Connecticut family of the name. This family was first known in Norfolk, England, in 1639. His unusual Christian name was given to all the oldest sons of the family from the time of the marriage of Ruth Belden, also of Connecticut, to Lieut. William Seymour, who was the first Seymour to marry in America.

Belden Seymour was bom June 14, 1826, at the home of his grandfather known as "Comfort Hill" in Vergennes, Vermont. His grandfather also bore the name Belden. His own parents were Harry Belden and Mary Lazell (Ward) Seymour of Framingham, Massachusetts.

At the age of fourteen Belden Seymour was sent by his uncle, Hon. Edward Seymour, to live with an older uncle, Charles St. John Seymour, a merchant in New York City. There he was given a good business training, and in 1844 came west on a trip to buy furs. He stopped at Ohio City to visit his mother's brother, Horatio N. Ward, whose farm was where The Peoples Savings Bank now stands, a part of which tract later became Belden Seymour's home. To that home he brought his mother and brothers and two little sisters in 1846, and there his own children were born.

Mr. Seymour early established himself in the real estate business at Cleveland and in 1857 added a fire insurance department. Both these businesses he conducted until his death on January 17, 1889, since which time his son, Belden Seymour, has continued to keep the name and integrity of the service before the public.

He became a member of St. John's Episcopal Church, for which his kinsman had given the land, and followed his father-in-law as vestryman and warden. He was always a consistent republican supporting his party and its measures invariably. Though repeatedly urged he always declined public office. In the Independent Order of Odd Fellows he was prominent and held all the state offices and some of the national ones. He was a member of the Cleveland Light Artillery and of the Union Club.

October 27, 1853, he married Eleanor Ingraham Herrick. Her father, Stephen Nelson Herrick, as a young civil engineer had come to Cleveland from Albany, New York, with Harbeck, Stone & Witt, the builders of the C. C. C. & I. Railroad. The senior member of this firm was a cousin of Mr. Herrick. The latter 's wife was Maiy Ann Brooks of East Haddam, Connecticut. As she was a niece of Richard Lord, Mr. and Mrs. Herrick on coming to Cleveland went to live with the Lords in the beautiful old colonial house Mr. Lord had built on Detroit Street at the same time his partner. Judge Barber, built on Pearl Street. It was all these relationships that identified Mr. Seymour with the lands granted to Barber and Lord by the Connecticut Land Company.

The children of the late Mr. Seymour are: Eleanor, wife of Andrew Squire of Cleveland; and Belden, who married Susan, the only daughter of John William and Ellen (Bolton) Fawcett, who came to Cleveland in 1866 from Liverpool. England. Mr. Seymour had no grandchildren.

The elder Mr. Seymour was illustrious enough to have a river steamer named after him.  From the Detroit Free Press, June 24, 1859:

The new stmr. BEL. SEYMOUR, built for Capt. N.D. White, by Norton & Leland, was out in the lake for a trial trip yesterday afternoon. She proved a perfect success. The steamer is 90 ft. in length, 16 ft. beam, 3 ft. depth of hold, and draws 10 1/2 inches. She is built for the navigation of the Muskegon River, Michigan, and will be run by her owner, Captain White. The name was given in honor of our townsman Belden Seymour. - Cleve. Her., 21st.