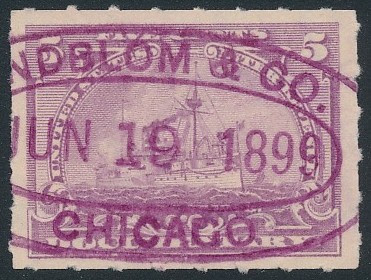 Mr Lindblom was an accomplished citizen of the city of Chicago who was born in Sweden.  From Men and Women of America:  A Biographical Dictionary of Contemporaries, L. R. Hamersly & Company, New York City 1910:

Robert Lindblom: Commission merchant; born in Nerike, Sweden, Nov. 17, 1844; son of Nils and Lovisa (Tolf) Lindblom. He was educated by private tutors, took a course in an agricultural and business college, and also a course in civil engineering. He came to this country in 1864 and settled at Milwaukee, Wis., where he engaged in business. He met with considerable success, and since 1873 has been engaged as a Board of Trade commission merchant, under the style of Robert Lindblom & Company, in Chicago. He was on the staff of Governor Altgeld, 1893-1897 and was president of the Civil Service Commission of Chicago from Feb. 18, 1898, to July 1, 1902, and member of the Board of Education. He was most instrumental in bringing the World s Fair to Chicago. He was one of the World s Columbian Exposition directors, the Swedish Royal Commissioners to that exposition, and he was knighted by the King of Sweden for his distinguished services in that connection. He is secretary of the Farmers National Exchange Company. He is a member of the Union League and Swedish Clubs of Chicago, and of the Milwaukee Club of Milwaukee. He married in Milwaukee, Wis., Nov. 17, 1874, Hattie Lewis, now deceased, and they had three children, one now deceased. Residence: 678 La Salle Avenue. Office: Postal Telegraph Building, Chicago.