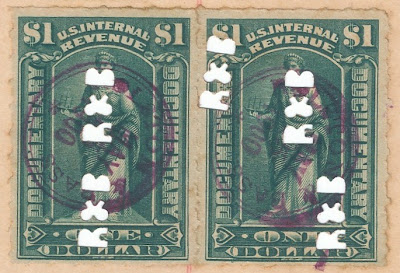 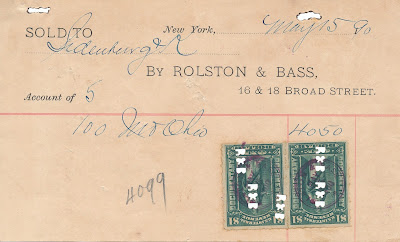 Through the first years of the 1898 tax period, Rolston & Bass carried on a brokerage as named partners, along with the unnamed Edwin Hooley.  By 1901, however, Bass ceased to be a part of the firm.  See the handstamped cancels below for Rolston & Hooley, combined with the old R&B die cut cancels.

The co-partnership between William H. Rolston, Walter A. Bass, and Edwin S. Hooley, unter the firm name of Rolston & Bass, has been dissolved.  William H. Rolston, member of the New York Stock Exchange; Edwin S. Hooley, and Peter Martin have formed a co-partnership, under the firm name of Rolston & Hooley, and will continue the banking and stock brokerage business.

David Thompson scan
Posted by John Langlois at 6:00 AM