The firm of Seabury and Johnson was formed circa 1874 to market Benson's Capcine Porous plasters, which presumably used the oil of hot peppers in connection with some sort of poultice.  They utilized private die proprietary stamps, which won't concern us here but can be seen on my website at http://rdhinstl.com/mm/rs216.htm. 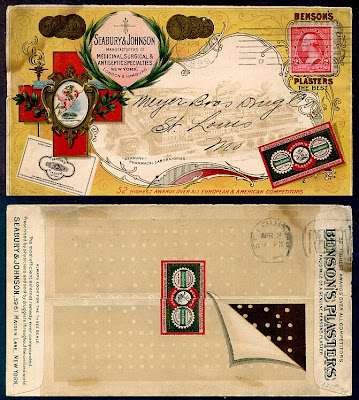 A Seabury and Johnson cover from 1899.  Several versions of these exist, usually priced to reflect their attractiveness.

Johnson and Johnson used a private die proprietary stamp during the Spanish-American war tax period.  Its design mimics that of the familiar battleship revenues, minus ship.

The next spinoff came in 1897, when Edward Mead Johnson left the company to pursue his fortune with one he had created in 1895, the American Ferment Company, which marketed a digestive aid.  This company did not have a private die stamp, but their company name can be found on regular proprietary stamps. 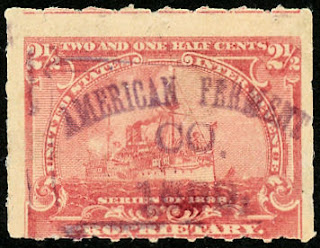 In 1905 the American Ferment Company changed its name to Mead Johnson & Company.  In its day, the firm manufactured and marketed Pablum and Metrecal.  More recently it was acquired by Bristol-Myers Squibb, then spun off again as an independent company in 2009.  Its current flagship product is Enfamil.
Posted by Bob H. at 6:00 AM