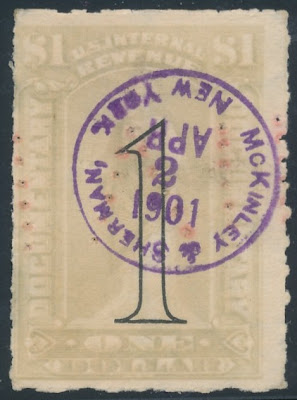 Only a few weeks before this stamp was cancelled, Mr. McKinley was quoted in The New York Times as being very bullish on the market.  NYT, March 17, 1901:

W. G. McKinley of McKinley & Sherman--The general situation would seem to be more favorable that at any time within the last month or so, and with corporation earnings increasing and a majority of the large financial interests on the bull side, it seems probable that a further rise, particularly in specialties, will be seen.