When J. P. Morgan was still alive, his company used large volumes of 1898 series documentary revenue stamps.  Jamie Dimon, J. P. Morgan's current CEO has probably never seen these stamps from a very different time in American business, when his predecessor had a level of power and responsibility that Mr. Dimon can hardly contemplate. 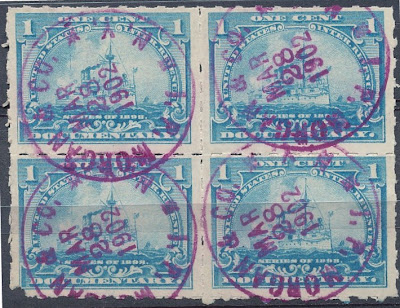 
Mr. Dimon, Pierpont is watching you, and probably rolling in his grave.  J. P. Morgan was the architect of stability through several panics, and the occasional creator of tempests in the market.  But he ran the most successful financial firm in the world.  Mr. Morgan's present successor is busy losing money.  Only in April did Mr. Dimon dismiss issues in his Chief Investment Office as a "tempest in a teapot".  Now the "too big to fail" bank, one that would get a tax payer bailout if in trouble, has been playing with fire and has blown $2 billion through the workings of its Chief Investment Office.  In the real world, you get fired for less.  Pierpont would have fired Mr. Dimon yesterday.  The Volcker Rule can't come fast enough.
Posted by John Langlois at 10:16 PM