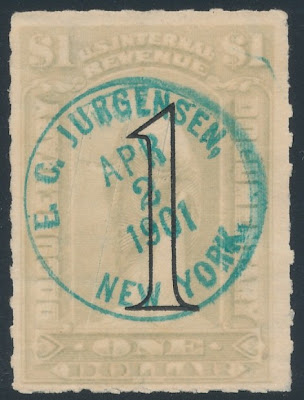 Edgar Jurgensen began the 1898 tax period as a broker with Barnes Brothers.   By 1901 he was running his own self-named brokerage firm.

Mr. Jurgensen became a suspect in a bit of trouble in 1910 -- the story sounds like something from 2012.

Special to The New York Times.

LYNN,  Mass., Dec.  14. -- Marguerite Jurgensen, the eight-year old daughter of Mr. and Mrs. Edgar C. Jurgensen, was kidnapped by three men on Monday afternoon, and carried away in an automobile.  The local police first learned of the case this afternoon, when Mrs. Jurgensen and her attorney, Stephen Breed, left for New York.  The Jurgensens were separated two years ago, and to Mrs. Jurgensen was given the custody of the child.  It is believed that either Mr. Jurgensen or agents acting for him were responsible for the girl's disappearance.

John Jurgensen, father of Edgar C. Jurgensen and a grandfather of the kidnapped girl, denied last night at his home, 9 West Eighty-first Street, that his son had anything to do with the girl's disappearance, and disclaimed all knowledge of the kidnapping.  Edgar C. Jurgensen, who has been living with his father, could not be reached.  It was said that he was out of town on business.  At Police Headquarters last night it was said that no request had been received for aid in tracing the girl.  Neither Mrs. Jurgensen nor Mr. Breed could be found among the arrivals at the hotels.

No readily available follow-up story is on the web to tell us what happened to Marguerite.  I believe, however, that Edgar was not unavailable due to an out of town business trip.  Draw your own conclusions.