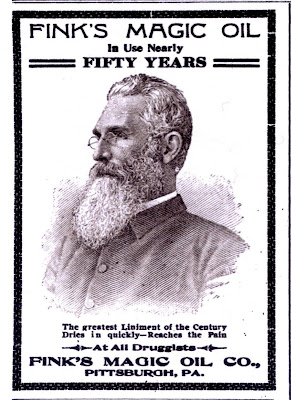 Editor's Note:  Malcolm Goldstein is a contributing blogger for 1898 Revenues.  this post is part of a continuing column on the companies that used proprietary battleships.
Henry George Greatrake Fink is name with which to conjure, and H. G. G. conjured his Fink’s Magic Oil into a fortune. His sketch in profile for a 1910 ad resembles either Abraham Lincoln’s image on the then newly redesigned penny or the stern majesty of an Old Testament Lord of the kind a Methodist preacher’s sermon might invoke. In fact, before he dis¬covered the patent medicine business, Fink was a Methodist minister. However, a portrait of him taken in the early 1900s shows a tall, gaunt figure, with a high forehead, deep-set eyes, a great white beard and an unruly head of hair, who seems most closely to resemble the renegade John Brown.

H. G. G. Fink was born on May 26, 1826 in Ross County, Ohio, south of Columbus. His father, Henry Fink, appears to have been a paper maker, and Henry’s family cut a swatch through the following three generations. The singular “Greatrake” of H. G. G.’s name derives from Henry’s apparent marriage to one Elizabeth (Eliza) Greatrake, whose family itself sired of a number of notable Baptist ministers, but the connection remains speculative. Fink became a Methodist minister on September 7, 1853 at Lancaster, Ohio, also near Columbus. In 1856, he married Almeda Wagy of Licking County, Ohio, whom he called Medie. A business directory from 1857 locates him as a pastor of Deavertown, Ohio, a town 54 miles southeast of Columbus. Methodist minsters of that era were circuit riders, and Fink’s circuit included numerous hamlets in southeastern Ohio: Nelsonville, Etna, Irville, Elizabethtown, Hebron, Roseville, Beavertown, Pickerington, Maxville and Baltimore. In 1861, Fink is listed as living in Elizabethtown. Sometime during the 1860s, while still participating in the annual gatherings of Ohio Methodist ministers, he began to manufacture Fink’s Magic Oil at Springdale, PA, a hundred miles further east, just outside of Pittsburgh, and in 1868 he moved his family to Springdale.

Once in Springdale, Fink apparently left the active ministry, although he did continue to pledge financial support for Methodist causes. The patent medicine business prospered enough for Fink to build a substantial two story farmhouse with well tended grounds, as a local contemporary print shows. He and his wife raised their six children (five to maturity) and made sure that their daughters as well as their sons were college educated. As a capitalist business owner, he naturally gravitated to staunch Republicanism, and, as the local Pittsburgh paper reported in 1889, signed a statement defending a local Republican candidate against an alleged slander. While not much is documented about Fink himself, a long poem, written and read by his local clergyman, Rev. W. H. Phipps, on the occasion of Fink’s wedding anniversary sheds some light on the Fink family in these years. Phipps published it in a book of poems printed in Pittsburgh in 1891. Although ostensibly celebratory, it sounds almost like a lugubrious dirge to the modern ear. It begins:

We come to celebrate, with family of Fink,
Anniversary – time quick, like skater in the rink,
That glides around the room, and meets us soon again,
Freighted with messages of pleasure and pain.
This couple, glancing back o’er many years they’ve pass’d,
Remember bright skies with few clouds overcast.

The poem continues in a similar vein through multiple stanzas devoted to youth, parenthood and grand-parenthood before posing, and answering, these concluding questions:

O have these friends broken from the gospel traces?
‘Tis true we now find them in magic places.
Was ministerial life so full of sadness?
Can they no longer praise Gospel oil of gladness?
Yes; never mind the calumny of pious cranks;
Not lucre, but ill health led them from the ranks,
To-night we’ll use each mirthful joyous leverage,
And pledge their weal and health in Chinese beverage,
As king and queen anoint with pleasure’s magic oil,
Rejoicing in their happiness from well earned toil,
Hoping we all may witness many glad returns,
While brightest friendship’s fire upon our alter burns.

It is notable, along with “magic” and “oil” appearing so prominently in this tribute, that the poem challenges the “calumny of pious cranks,” and casts in the most favorable light Fink’s change of career from the ministry to patent medicine as motivated by “ill health” and not the lure of “lucre” that the penurious lifestyle of the circuit preacher might have engendered.

Magic Oil’s growth and popularity appears to have been both immediate and astronomical. In the 1872 minutes of the Santa Clara Valley Agricultural Society - all the way across the country in California - report that a local merchant featured a display of Fink’s Magic Oil prominently in its noteworthy exhibit at the local agricultural fair. From the 1870s to the 1900s, Fink touted his Magic Oil as a cure for rheumatism, headache, toothache, sprains, burns, earache, sore throat, pains and aches, cramps, cholera morbus, colic, lameness or pain in back, limbs or joints, coughs and colds, poisons, frozen parts, deafness, corns or warts, chilblains, bunions and frozen feet, tired, aching sore feet, mumps catarrh in the head, asthma, eczema, water tetter, acne, etc., boils, pimples, ring-worm, cuts, open sores, bronchitis and griping pains. Fink’s pitch consistently hit a nerve. Indicative of his entrepreneurial skills, in 1902, while in his seventies, he was still energetic enough to prepare a short treatise on how to “work groceries and general stores,” and, in 1905, not only incorporated as a Pennsylvania corporation capitalized at a value of $100,000, but also enrolled in the National Wholesale Drug Association’s price maintenance plan (which, as noted in an earlier installment of this series, was attacked by the federal government the following year and set aside by consent decree in 1907).


Whatever its intrinsic merits, the secret of Magic Oil’s success probably lay in its principal component, which - as set forth in the September 28, 1908 circular made by the Dairy Commissioner of Connecticut mandating proper disclosure of ingredients - was 87% alcohol, among the highest amounts enumerated in the Dairy Commissioner’s very long list of “medicines intended for internal use.” H. G. G. Fink died October 15, 1910, at the venerable age of 84, but the manufacture of the Magic Oil continued, even as the labeling laws gradually became more stringent. By the 1930s, the Food and Drug Administration seized and destroyed a shipment of Fink’s Magic Oil, now manufactured by the H. G. G. Fink Laboratories of Cincinnati, Ohio, as misbranded on the grounds that the Magic Oil was not an “oil”and consisted essentially of water, alcohol (now a mere 48.1 percent) with minuscule amounts of cassia and sassafras. 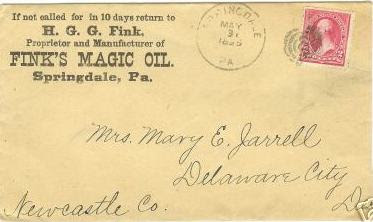 The true inheritor of H. G. G. Fink’s talent for salesmanship was his grandson, George E. Merrick (1886-1942), who, making his mark in real estate, a very different field of endeavor, ultimately conjured “castles in Spain.” H. G. G.’s daughter Althea, a college educated artist in her own right, married Solomon G Merrick, a clergyman with a degree from Yale divinity school. When one of their twin four-year old daughters died of diphtheria in Duxbury, MA in 1899, where Merrick was then serving as a minister, H. G. G. suggested that the Merricks might find the climate more agreeable in south Florida, a new frontier then opening for development. Acting upon H. G. G.’s insight, the Merricks moved, sight unseen, to a swampy area of Miami known as Coconut Grove. George Merrick, then barely a teenager, interrupted his schooling to help his father turn the family farm into a successful plantation growing guava, vegetables and grapefruits by 1907, and assumed full control of his family’s fortunes when his father died unexpectedly in June, 1911. Immediately investing in more Florida land, Merrick spent the rest of his life developing, grooming, and promoting this swamp into the planned community of Coral Gables, Fl. Drawing upon the talents of his uncle, (George D) Denman Fink (1882-1956), a recognized artist, illustrator and teacher, Merrick sought to shape Coral Gables, envisioning fourteen neighborhoods of different style homes, among them Spanish haciendas, to appeal to different tastes. While only six of the fourteen neighborhoods were ever built in Coral Gables, Merrick’s foresight marked him as a notable early city planner. In 1925, by donating land for a campus as well as funding a substantial endowment, he helped bring the University of Miami to Coral Gables, thus insuring its viability as a permanent settlement. Merrick’s endeavors, some quite harrowing in their own right, have been fully chronicled in an illustrated biography by Arva Moore Parks. His cousin, Denman’s son Robert (1905-89), also became an artist and teacher, like his father, whose work is in the permanent collection of the Neuberger Museum in Purchase, NY, and the Hudson River Museum in Yonkers, NY. 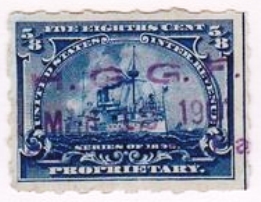 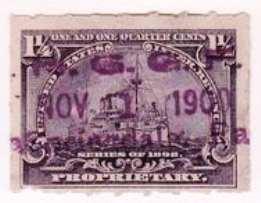 Personal note underlying this article: in the 1970s, this author possessed a battleship revenue stamp canceled “H. G. G. F. - Springdale PA.” It was acquired at minimal cost at some philatelic show from the proverbial bowl of mixed colorful stamps which dealers used to leave out on their tables, like M & Ms, to attract attention. The H. G. G. F. was an odd enough letter combination to imprint itself in memory and cause endless speculation as to the meaning of the initials. In an era before the Internet and eBay, while prowling for different kinds of collectibles at antique shows - then a completely separate and different venue from stamp shows - this author discovered that trade cards, bill heads, and medicine containers, sold by so-called “ephemera” dealers, matched the Scott RS and RB issues. A bill head from “H G G Fink’s Magic Oil Co.” of Springdale, PA, quite serendipitously and fortuitously unearthed at one such antiques show, resolved the battleship revenue riddle with a single lightening bolt. When the paired stamp and bill head passed back into the greater philatelic universe in the 1980s, this author cherished the hope that they remained together and somehow led, directly or indirectly, to the Fink listing in the Mustacich compilation. The accompanying stamp images are courtesy of Robert Mustacich.
Posted by John Langlois at 6:00 AM