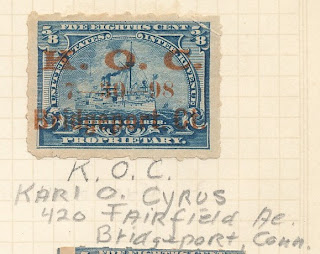 K. O. C.
7-30-98
Bridgeport, Ct.
Penciled notes by Henry Tolman
Listing can be found in extension section of the Chappell/Joyce list
The Bridgeport Telegram, Friday, April 8, 1955:
Born in Norrkoping, Sweden, Jan. 23, 1867, Mr. Cyrus came here in 1888 and first established a pharmacy at 415 Fairfield avenue. He moved to the Fairfield-Courtland corner in 1909 where he remained until his retirement.  He formerly resided at 32 Hazelwood avenue.

Described in the Pharmaceutical Journal some years ago, was "Cyrus' Pretty Fountain." It was of white marble with green marble trimming. During his term as treasurer of the Connecticut Pharmaceutical association, Mr. Cyrus was the winner of an American Druggist contest for the best set of advertisements for a retail drug store.

At the time Mr. Cyrus opened his pharmacy, Fairfield avenue was so dusty he suggested to the city that the asphalt "be wetted down every night when there are no teams or bicycles on it;" a father of night street sprinkling.

Mr. Cyrus had the first street lights in the city installed in front of his store at his own expense.

A member of the Masonic fraternity since 1889, he was in Corinthian lodge, 104, AF and AM; Jerusalem Council, 16, R and SM; Jerusalem chapter, 13, RAM; Hamilton Commandery, 5, KT; Lafayette Consistory, 32nd degree and Pyramid Temple, AAONMS. He also was a former member of the Algonquin club and a charter member of the Kiwanis club.