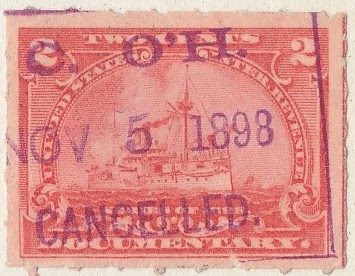 C. O'H.
NOV   5   1898
CANCELLED.
This stamp and cancel first appeared on this site in 2009.  At the time, I could not identify the initials, though I did have a lead that the cancel was probably placed there by a firm involved in rail transportation.  The lead was accurate, but not sufficient.  One and half years later, while looking through some of Bob Hohertz on-document material, a check signed by Mr. O'Hara with this cancel showed up.  Problem solved.  Whatever collector located and preserved this stamp likely found it on a check in the same pile that included Bob's check.
The Union Refrigerator Transit Company was established in 1895 by Joseph Schlitz Brewing Company and was based in St. Louis and Milwaukee.  The company operated a fleet of refrigerated rail cars that were used for far more than Mr. Shlitz's beer, and its successors operated over 7,000 refrigerator cars by 1940.
Mr O'Hara, the company treasurer, has left little for posterity that I can trace.
Posted by John Langlois at 3:26 PM