The Antikamnia Company is one of the best known users of printed cancels on the 1898 proprietary series of battleship stamps.  The company produced a pain remedy called Antikamnia, which was combined with a variety of other medicines like heroine (!) to create a multiple variety product line.  During the 1898 tax period, cancels like that below were most often seen on canisters of Antikamnia tablets: 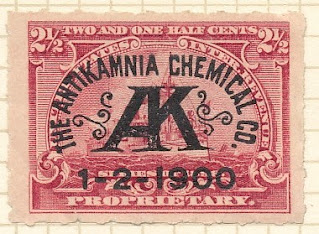 But the company was also a user of handstamp cancels on the battleships, three St. Louis Provisionals, and a private die proprietary.  This makes Antikmania material from the 1898 series very collectable.  However, one of Antikamnia's greatest contributions to its collectability came from a calendar series it published for the years 1897 to 1901.  The calendars were distributed for free to doctors and medical practitioners, in the US and throughout the world.  During those years it used the artwork of a St. Louis doctor named Louis Crusius, who had a rather profound knowledge of anatomy.  Crusius used that knowldge, and his skills with a brush, to produce artwork in which human heads were replaced by detailed renderings of the human skull.
The irony of the artwork was not fully understood at the time the calendars were published.  The chemical used by Antikmania as an analgesic was acetanalide, which is metabolized in the body into acetaminophen and aniline.  While the acetaminophen created the pain relieving and anti-fever effects, the aniline is toxic.  The Pure Food and Drug Act passed in 1906 would regulate acetanalide out of pharmaceutical use.  But in 1900, these calendars were promoting a drug that in some cases resulted in the morbidity and mortality of its users.  The skulls were more than appropriate as an advertising vehicle.
Creepy yet fascinating.  I will let the calendars speak for themselves: 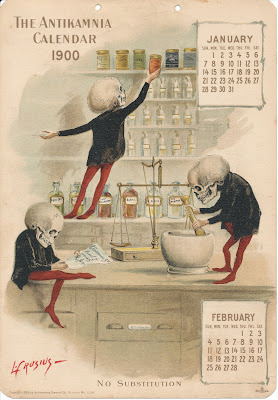 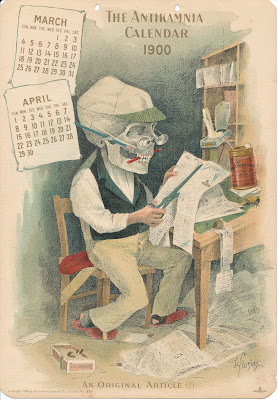 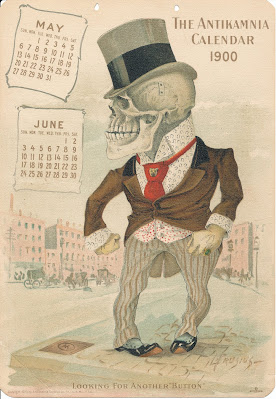 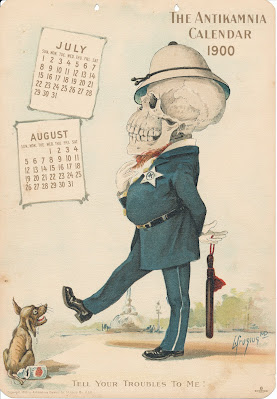 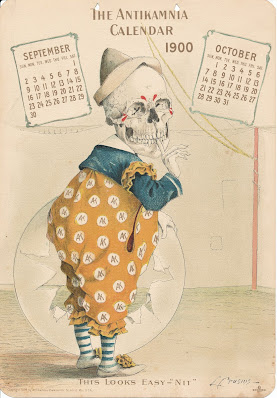 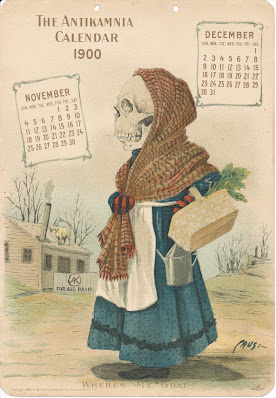