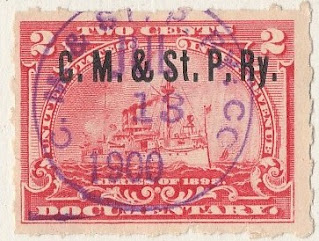 As I am in St. Paul this week I wanted to post at at least one stamp with St. Paul as the subject.  Railroad historians and buffs know that the twin cities of Minnesota were a major railroad hub in the United States, and they remain so.  While Chicago was the primary western terminus for eastern railroads like the Pennsylvania and the New York Central, St. Louis and Minneapolis-St. Paul were the true frontier hubs for people heading west, and for goods like grain and cattle heading to the east.

St. Paul and Minneapolis were major stops or headquarters for several US Class I railroads, including the CM&StP, The Great Northern, and the The Northern Pacific.

A few years ago I looked into buying a house off of Summit Avenue in St. Paul that was designed by Cass Gilbert, the same architect that designed the United States Supreme Court.  The house had been commissioned by an attorney for the Chicago, Milwaukee & St. Paul, and was only a few blocks from the James J. Hill House.
Posted by John Langlois at 4:56 PM