I left another series of blogs unfinished during my two month hiatus from the 1898revenues blog. I last had been blogging about on-document usages of the three high value Portrait Issues. To review those prior blog posts featuring the $100 John Marshall, the $500 Alexander Hamilton, and the $1000 James Madison issues, all used on stock certificates, go here. 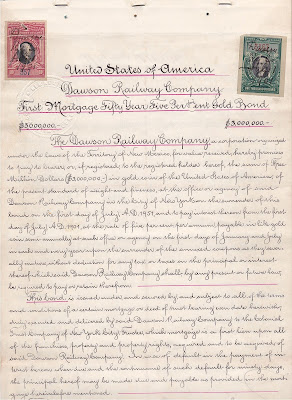 
The Dawson Railway was built during 1901-03 to connect the newly established coal-mining town of Dawson, New Mexico with Tucumcari, New Mexico. It included lucrative linkages with both the Atchison, Topeka and Santa Fe Railway and the Chicago, Rock Island, and Pacific Railroad.


Executed on July 1, 1901 the bond provided seed money for the initial construction of the rail line beginning in August 1901. It was issued under, and secured by, a first lien mortgage deed of trust executed by the DRC with the Colonial Trust Company of New York City. I've not seen the bond's signature page, but suspect Charles B. Eddy who founded the El Paso and Northeastern Railway system, under which the Dawson Railway operated, may have been involved.


Eddy subsequently sold his railroads to the Phelps Dodge Corporation who had extensive mining operations throughout the Southwest, including some located in Dawson. Phelps Dodge later sold all its western US railroad operations to the Southern Pacific in the 1920s.


The bond's due date was July 1, 1951. By then the coal was gone and, for the most part, so was the town of Dawson. Reportedly it was a ghost town by 1950 and today little remains other than a cemetary. Again, I've not seen the entire document, but with the various sales and transfers of ownership the bond and its underlying mortgage likely had been called or renegotiated long before the due date. 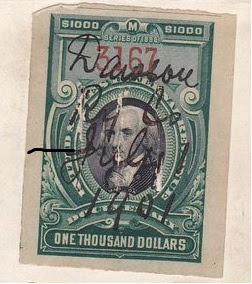 
As a precaution against reuse, most higher value tax stamps, as evidenced here, were subjected to "cut" cancellation as well as handstamp or pen cancellation. The $500 stamp on the document was similarly cancelled. It is interesting to note that the bond was issued on July 1, 1901, the effective date for the War Revenue Reduction Act of 1901, abolishing the proprietary taxes and eliminating or reducing many of the other taxes established under the War Revenue Act of 1898. The tax on bonds, however, remained unchanged at 5 cents per each hundred dollars in value or fraction thereof so the $1,500 represented by the Hamilton and Madison stamps was the proper tax to pay.


New Mexico was still a territory in 1901 undergoing raw growth and development. Our thanks again go to Bob Mustacich for providing this great document, a tangible example from this fascinating era in US history.
NOTE: Bob also provides an excellent site for 1898 revenue stamp collectors; especially helpful for collectors of proprietary handstamp cancels.
Posted by Frank Sente at 6:00 AM