The Chattanooga Medicine Company, like Mumm Champagne, is still in business in 2010.  The company is today known as Chattem, but remains Chattanooga based and has a stable of products recognized by millions of Americans.  Kaopectate, Selsun, Flexall, Aspercreme, Gold Bond, and many other products are manufactured by Chattem.  As a kid in the south growing up in the 1970s, I recall many of these products advertised on AM radio, especially Gold Bond.
Chattanooga Medicine's printed cancels are special because their design included a bit of flair.  All the company's printed cancels include the company name in an arc surrounding a prominent star designed to bullseye the battleship on the stamp.  All of Chattanooga Medicine's known printed cancels follow the design below as originally hand illustrated in the Joyce lists: 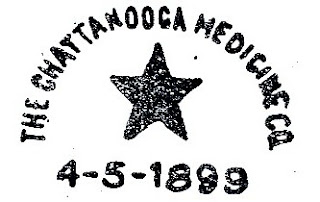 Alternatively, the image below comes directly from a cancelled stamp: 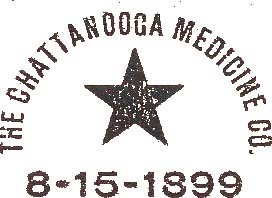 In the Joyce lists, black and white illustrations of fancy cancels are included.  In all instances these drawings were made by hand.  The above example comes directly from a stamp.  I am just starting to learn to use the "Magic Wand" in Photoshop, and so far the I've learned how to "rip" cancels like the one above, creating an  image of the cancel clear of its underlying stamp.
To the real business of this post and the process of updating the Joyce/Chappell list for these cancels.  Below is the Chattanooga Medicine listing from the Joyce volume, a discrete and simple single column.

Not very legible by looking at the image in this post, but you can click the image and view a readable version.
Like Mumm, the Chattanooga cancel listing is fairly simple.  The company cancelled two values of the proprietary series, the five eighths cent and two and a half cent stamps.  Few printing varieties exist.  Within the next two weeks I will post a link to an Excel file of this list for public comment and contributions.
On a personal note:  I spent four summers as a kid at Alpine Camp near Fort Payne, Alabama.  Chattanooga was the big city nearby. 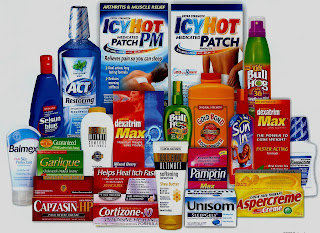