Approximately 3 years ago a series of lots were offered on Ebay by a seller in the United Kingdom.  The lots consisted of 1898 series revenues on document fragments.  All seemed to be from firms engaging in equity transactions.  Below is a prime example of one of those fragments, cancelled by J. P. Morgan and Company. 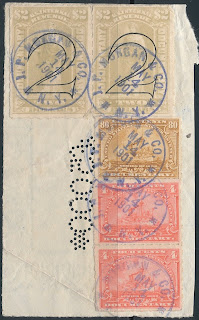 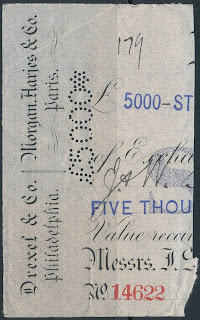 Reverse side of fragment with corporate branding for
Drexel & Company in Philadelphia
and
Morgan, Haries & Company in Paris
Drexel and Company:  Founded in 1838 by Francis Martin Drexel.  The company experienced early success from opportunities created by gold discoveries in California.  A. J. Drexel, the son of Francis Martin Drexel,  became the head of Drexel & Company when his father died in 1863. A.J.  partnered with J.P. Morgan and created one of the largest banking companies in the world, Drexel, Morgan & Co., which might explain the formal association with Morgan, Haries on the transaction fragment posted above.
Posted by John Langlois at 12:01 AM