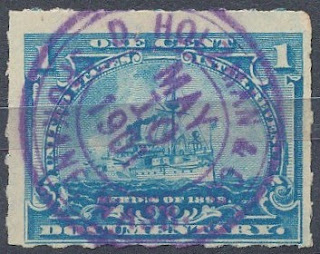 D. HOLZMAN & CO.
MAY
10
1901
SPOKANE, WASH.
From an illustrated history of Spokane County by Reverend Jonathan Edwards, 1900:
D. Holzman & Company, wholesale wines, liquors and cigars. — The business was established by Mr. Holzman in June. 1884, the present firm name being adopted in January, 1891, when Mr. J. Reubens became a partner. The premises occupied consist of an entire two-story and basement building 50 x
125 feet in area. In the basement a bottling department, with improved machinery, is fitted up where all kinds of carbonated beverages and beer are bottled. The office and salesroom is on the first floor and the second floor is used for storage. Seven- persons are employed and the business extends throughout Washington. Idaho, Montana and British Columbia. Mr. David Holzman came here from the Black Hills, South Dakota, where he was formerly engaged in the clothing business. Mr. J. A. Reubens hails from the same place and was at one time in the wholesale business there. Both gentlemen represent their bouse on the road, and
the local management is in the hand? of Mr. J. A. Schiller, who also came from the Black Hills, and who has had charge since the inception of the business.
Posted by John Langlois at 1:00 AM