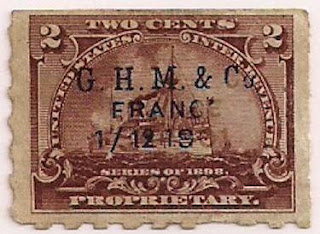 G. H. M. & Co
FRANCE
1/ 12 1901
Another image contributed by Frank Sente.  This time a December 1901 Mumm printed cancel with a stark printing variety.  Notice the "ghost" image of cancel at end of "FRANCE" and 1901.  Frank believes this may have been caused by a foreign substance on the sheet which later came off, leaving nothing but a ghost image.  This explanation would mean this variety is a "one-off" and not a repeated variety.
Posted by John Langlois at 7:23 AM