Time to tread on the good work of our ancestors in the hobby.  Franklin Smith in the early 20th century, Clarence Chappell in the early to mid 20th century, and Morton Dean Joyce in the mid-20th century all produced lists of the printed cancels on the battleship proprietary stamps.  The last published list was Joyce's update of Chappell's work, and that was completed in the 1950s as an addendum to the American Revenuer.  With the help of modern technology including this blog site and Google docs, I will begin today to post working and updated lists of the proprietary printed cancels based on Joyce's work from the 1950s.
For the past three weeks I have posted the printed cancels of G. H. Mumm on this site, cancels which are referenced in Joyce's list.  But below is a link to an updated list which is stored in Google docs and which is freely available by clicking on the link.  To the original Joyce list I have added provisional numbers, so that each Mumm cancel is assigned its own number with the protocol GHM0xx.
I have also made changes to the orginal list based on cancels available to me that are not included in the original Joyce list.  And I have also made changes by simple inference.  Where it is likely there should be a cancel with a certain date, I have included a reference to such a cancel and assigned the cancel a provisional number.  On this basis there are 80 provisional numbers for the Mumm cancels running from GMH001 to GHM080.
The beginning of the list looks like the screen capture below: 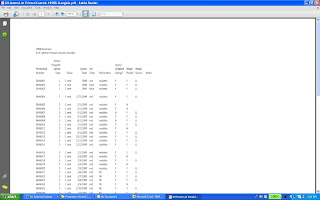 I encourage and request that anyone having an interest in these cancels who has a change or contribution to this list write me an email or leave a comment at the end of this post.  I will work with you to update this list to enable us to create a more complete checklist of the battleship printed cancels.

This effort will not stop with Mumm Champagne.  This site will work to create a list of most if not all of the printed cancels used on the battleship proprietaries.  Any comments should be sent to 1898revenues@gmail.com.
Posted by John Langlois at 1:00 PM