Cancel for May 13: Sheafer & Lowrey 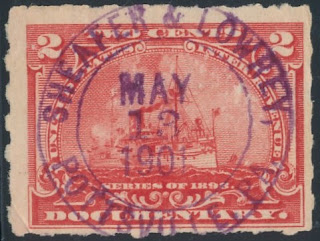 SHEAFER & LOWREY,
MAY
13
1901
POTTSVILLE, PA.
From a volume on the history of Schuylkill County:

WALTER SCOTT SHEAFER, late of Pottsville, civil and mining engineer, and later engaged in the real estate and insurance business, was born April 5, 1837, at Wiconisco, Dauphin Co., Pa., son of Henry and Mary (\\'enrich) Sheafer. His father was a prominent pioneer of Dauphin county, president of the Lykens Valley Railroad Company, developed and superintended the Lykens Valley coal mines at Wiconisco, and in 1834 introduced anthracite coal into the Susquehanna markets. After graduation from the Scientific department of Yale College, in 1860, Walter S. Sheafer entered the offices of his brother, P. W. Sheafer, with whom he was associated until the death of the latter, in 1891. After that he acted as one of the executors of the Sheafer Estate and was actively engaged in the management of the same. He was especially interested in the development of the Mahanoy and Shenandoah coal fields. For many years he was the engineer for the Gilbert Estate, owners of property in these several regions.
During his professional career as mining engineer he made extensive examinations of coal properties in many parts of the United States, and also in Mexico. Mr. Sheafer was interested in the insurance business and was connected with the firm of Sheafer & Lowrey for many years. In 1881 Mr. Sheafer was president of the Board of Trade of Pottsville, and through his especial efiforts the Tilt Silk Mill was located there. He was also connected with the installation of the Steam Heat Company, and was its president for many years, until his death, which occurred April 20, 1908, at his home in Pottsville, No. 207 Mahantongo street, after a year's illness. He was buried in the Charles Baber cemetery. On June 7, 1864, Mr. Sheafer was married to Jane Augusta Camp, a native of New Haven, Conn., born Feb. 2, 1838, and they had two children, Paul and Frances M. (now JMrs. Howell Habberstadt). Mrs. Sheafer survived her husband but a few months, passing away Sept. 22, 1908, at her home in Pottsville. She. too, is interred in the Charles Baber cemetery. Mr. Sheafer was a past master of Pulaski Lodge, No. 216, F. & A. M., of Pottsville; a past high priest of Mountain City Chapter, No. 196, R. A. M. ; a past eminent commander of Constantine Commandery, No. 41, K. T., of Pottsville ; and a Scottish Rite Mason of the thirty-second degree. He assisted in organizing Constantine Commandery and was its first eminent commander. Paul Sheafer, son of Walter Scott Sheafer, is now engaged in the insurance business in Pottsville.
Posted by John Langlois at 12:01 AM