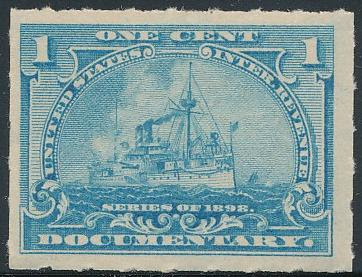 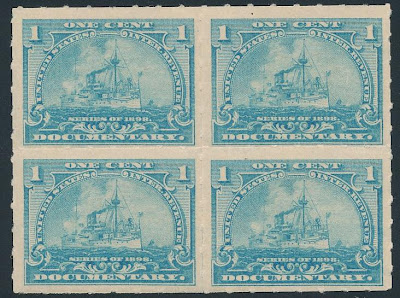 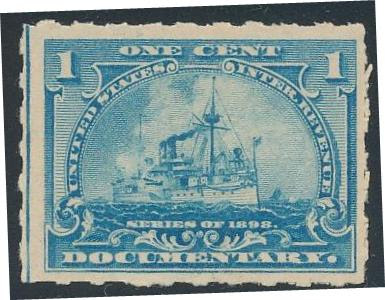 Unused hyphen-hole single. I need to touch up the frame around this stamp. The single is torqued a bit in the orginal Vario page and I rotated it a couple of degrees digitally, leaving the white wedges surrounding the frame. 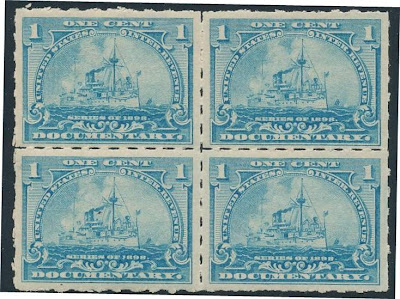 Unused hyphen-hole block of four.
I've already done one entry on the roulette and hyphen-hole issue. I never brought up one source of confusion regarding these stamps and the stamp-business that left me confused about the battleships for years.
Like many collectors of my vintage and before (I was born in the early 60s) I was given a beginners stamp album soon after I expressed an interest in stamp collecting. As I recall, mine was titled "My First Stamp Album." It was hard-bound, yellow, and had a drawing of a boy scout, a girl and other prospective collector types. Whatever the case, I quickly advanced to a Scott National Album and eventually I acquired the revenue pages for collecting US revenue stamps.
I learned much from those pages and from the Scott catalog. From the first series I moved the perfs (all the "c's") to the beginning, the imperfs or a's right behind the perfs, and placed the part perfs after them. I did this just because I had more perfs and I liked being able to open the album to a more filled out page. But then I had to set up a bunch of blank pages for the silk papers. And I wondered why Scott would have pages for major perf varieties but not a major paper variety.
Whatever the case, it was the 1898 issue that caused me the most confusion. Forget the silk papers. The album only held spaces for one perf variety of the battleships and the dollar value 1898s. And the type to display wasn't even designated. If I had to guess I would say that the typical revenue page collector would have a mish-mash of HH and roulette stamps for their 1898s. With no space for the two types of stamps. I had to put blank pages in to mount the hyphen holes and left the designated spaces for the rouletted stamps.
This lack of space gave me the impression for years that the distinction between the types was largely unimportant to philately, since the first issue perf, part perf, and imperf stamps all had their own spaces in the album. Why weren't the 1898s given the same respect.
I don't use an album anymore. And the hyphen hole and roulette distinction is one of the most important distinctions in 1898 collecting. The difference certainly affects values. Those differences I will explore in later posts.
Posted by John Langlois at 4:10 PM