Courtesy of Bob Mustacich, via the prompting of Dave Thompson, is presented to you a series of margin curiosities collected and hand annotated by Anthony Giacomelli.  The battleship series is known for denomination/series margin inscriptions, eg the 1/8 CP, 3/8 CP and similar markings, that enabled the printers to better identify the values they were working with, since battleship series stamps were all of similar design and size.

The markings in questions are numbers, mostly in reverse, independent of the values of the stamps on the plates. What appear to be fours are not reversed.  Giacomelli located numbers 1-4 on various values.

I've looked over some of my collection, and over items posted to this site, and have found markings/numbers similar to those below.  In Frank Sente's American Philatelist article you can find what appears to be a 4 on a 3/8c proprietary pair.

Below are four examples, with Giacomelli's notes.  I'm interested in any explanation that might exist for these markings/numbers.  If you have one, please comment below or write to 1898revenues@gmail.com. 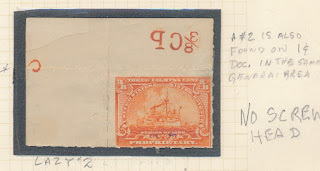 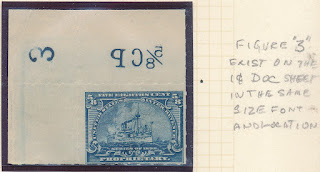 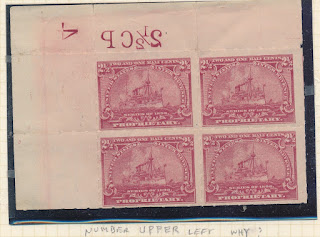 Posted by John Langlois at 3:00 PM